Is your destination in decline?

“Tell me who visits your destination, and I’ll tell you whether it’s in decline!” This was the bet made by Stanley Plog when he developed his model of matching traveller profiles with phases in a destination life cycle. When a destination is visited by large numbers of tourists, it has reached a critical phase in this cycle; to avoid decline, destinations must understand that tourism growth must be planned and controlled.

The life cycle of a destination: from discovery to decline

There are five different traveller profiles in Stanley Plog’s model: from venturers to dependables. According to Plog, these various tourist personality types are associated with phases in a destination life cycle because the type of tourist who visits a region indicates the area’s level of development, and in some ways determines its life cycle. Figure 1 illustrates the various phases in a tourist area’s life cycle (TALC), which were developed by R.W. Butler, Ph.D, in 1980. 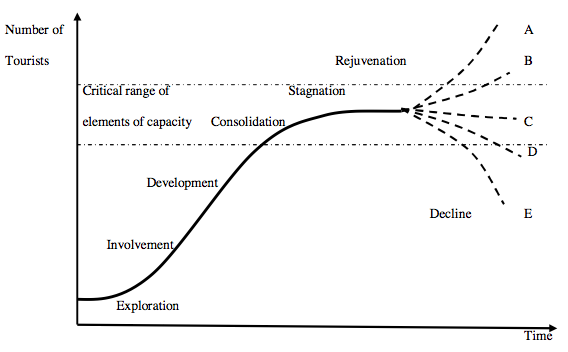 Discovery
During this phase, a little known destination is visited by the first venturers in search of new discoveries and unexplored areas. Through word-of-mouth, the area begins to attract more tourists.

Discovery – Development
Once venturers have begun exploring a destination, they are followed by near-venturers. This creates the first major wave of visitors who – because they are more demanding in terms of services – initiate real development.

Development
With the destination’s notoriety growing, the media, always looking for something new, show up in the region and enthusiastically report on its charm and cachet. This then “condemns” the destination to rapid growth and the arrival of so-called centric travellers. Growth continues and everyone is happy: the number and value of hotels increases; jobs multiply; government coffers overflow with taxes; many areas are enhanced; local stakeholders smugly congratulate themselves on finding a gold mine and believe that tourism is the perfect industry to ensure longevity and unlimited growth. By this time, venturers and near-venturers have abandoned the area and mass tourism has arrived.

This phase is crucial because when a destination is really booming, no one cares about planning or controls. For this reason, it is important to take action at this stage to manage development and define a long-term vision.

Maturity – Decline
Riding this wave of popularity, a destination is too often lax in its regulations: the number of hotels continues to grow; fast-food restaurants pop up everywhere; shops, movie theatres and other forms of entertainment multiply; wholesalers develop packages. The area starts to get “touristy” and there is unchecked development. The destination is unable to resist the easy money of tourism and unsustainable development. Under such pressure, the destination loses its distinctiveness and looks like any other destination. The centrics now stop coming and the near-dependables start to frequent the area. According to Plog, if 30% or more of a destination’s reservations come from package deals, the destination has begun a decline that will last for several decades.

Decline
Despite the boom, decline is now inevitable. The destination now only attracts dependables, who prefer to visit and revisit well-established known quantities. Though often more loyal, this clientele spends less, stays a shorter time and is less active. The destination becomes less lucrative. Deserted by the other tourist segments, the market gets smaller. Managers don’t understand what has happened because arrivals kept rising. The destination must then try to differentiate itself and reposition itself in the market.How many times has this happened? Emerging destinations suddenly become popular and then are ignored as travellers head to newly discovered destinations. Over-crowding leads to decline and a different traveller clientele, and then everything changes!

Obviously, Plog’s model does not apply to every destination, but it does provide food for thought. Furthermore, a destination may find itself in a different position on the curve depending on whether one is considering local, regional, national or international travellers.

Can decline be overcome?

According to Michael Leven, a 45-year hotel-industry veteran, only an earthquake can revive a product at the end of its life cycle. One way to overcome decline is for a destination to develop a new product to give itself a boost or reposition itself and change its marketing strategy. As an example, Leven points to the cruise industry, which languished for many years and then successfully rallied by developing products to meet the needs and preferences of different types of travellers, from Antarctic cruises to classic luxury cruises to thematic cruises.

The case of Costa Rica

A group of researchers from the Cornell University School of Hotel Administration used Plog’s model to examine the profile (behaviour and preferences) of American travellers to Costa Rica. From 1999 to 2003, the number of tourists in Costa Rica grew 20%, with Americans accounting for the biggest jump, 30%. The country’s beautiful landscape make it one of the most popular destinations in Central America and it definitely attracts more international travellers than its neighbours (Belize, Salvador, Guatemala, Honduras, Nicaragua and Panama).

With such an increase in tourist arrivals, one would say the destination is in the development phase. The study findings confirm this as well, indicating that the country is becoming more popular with centrics and that fewer near-venturers are visiting now. If Costa Rica wants to continue riding this crest, it must orchestrate its growth so as to avoid excessive or inappropriate development, because it enjoys a high profile as an ecotourism destination.

Plog’s model applied to US visitors to Canada

Although statistics show Americans are travelling abroad in record numbers, the drastic drop in their numbers to Canada could signal the decline of Canada as a destination. On the other hand, perhaps the exchange rate, the price of gas and upcoming heightened security measures are the only reasons behind this dip. Still, near-dependables and dependables (who make up the smallest percentage of the population) may continue to visit Canada, while the centrics (who make up a majority of the population) will abandon it for more exciting or attractive lands. It may be time for Canada to start courting other American states, revamp and reposition its product for its neighbours or even target other clienteles.

If there were a magic formula, many destinations would have adopted it long ago. However, once a destination understands how the life cycle works, it can control development and maintain its ideal position. Here are a few suggestions:

According to Stanley Plog, destinations that do not plan their development are only harming themselves – by losing the charm that attracted venturers in the first place!