Over the past few years, hotels have invested heavily in order to satisfy their clients’ internet access needs. However, although the demand is obvious, customers’ willingness to pay is less so. Also, because a growing number of clients now travel with laptops, wireless networks are becoming increasingly popular. Do hotel owners have to resign themselves to losing some of their customers if they fail to provide these high-tech amenities? A survey of American business and leisure travellers, conducted by Yesawich, Pepperdine, Browne & Russell (YPB&R), yielded some interesting results.

Around the globe, an ever‑increasing number of places now offer wireless internet service (wi‑fi). According to an ABI Research study, the number of wi‑fi hotspots worldwide will grow by over 25% in 2007, for a total of 179,500 of those areas so beloved by laptop owners. About 72% of them are found in North America and Europe, but the Asia‑Pacific area is showing rapid growth in that respect.

It’s not just the offer; the interest on the part of internet users is also rapidly expanding. In addition to the burgeoning number of internet subscribers there is an astonishing growth in wireless use, as people become more and more used to going online to check the internet and e‑mail.

The hotel industry is well positioned to make the advantages of wireless internet available to its clientele. There are currently 46,000 wireless hotspots in various kinds of accommodation establishments. This amenity confers an obvious competitive advantage that many large hotel chains are eager to acquire. Some operators also use wireless networks for their internal communication.

Two recent surveys conducted in January 2007 by YPB&R shed some interesting light on the relative importance of wireless internet service in hotel rooms. The first survey was conducted on 304 leisure travellers, while the second focussed on the same number of business travellers. Both samplings surveyed American travellers who had travelled over 120 km from their home and spent at least one night in commercial accommodation.

Internet in the room

Clearly, the internet is becoming an essential service and, increasingly, clients expect it to be offered free of charge. Business travellers more or less demand high‑speed wireless internet access in their hotel room (Figure 1). Over 39% of business travellers surveyed said that this free service is extremely important, and 46% of leisure travellers said it was very important (see ratings in columns 4 and 5). The stated importance of this service to travellers decreases significantly as soon as there is a cost attached to it. 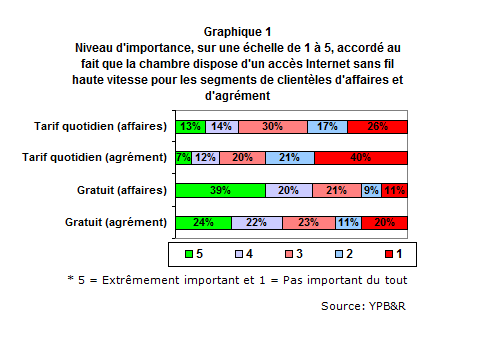 Since an increasing number of travellers use laptops, customers obviously prefer wireless internet service. However, both clientele segments still displayed significant levels of interest in having wired connections in their rooms (Figure 2). However, it is to be expected clients will increasingly prefer wireless access. 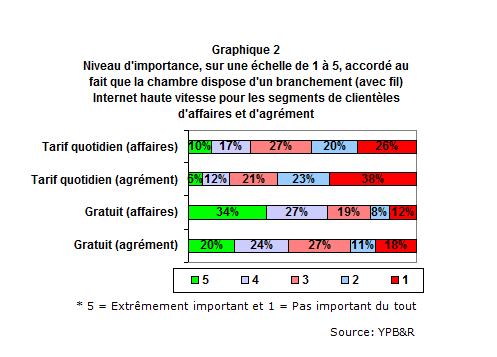 When questioned about the importance to them of knowing that an accommodation establishment had a public space with high‑speed internet access, almost half (49%) of the business travellers surveyed (compared to 36% of leisure travellers; see Figure 3) felt this amenity was very important as long as it was provided free of charge. Travellers who are prepared to pay for this type of service are in the minority. 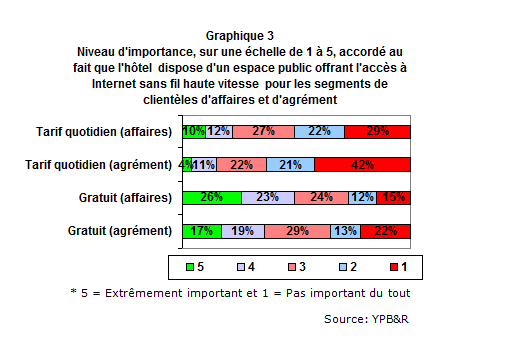 As soon as a cost is attached to internet access it becomes clear just how much travellers expect to receive it for free (Figures 4 and 5). Interestingly enough, 9% of leisure travellers not only refuse to pay for high‑speed internet but would quite simply stay elsewhere where the service is provided for free. Almost one quarter (23%) of business travellers feel the same way. 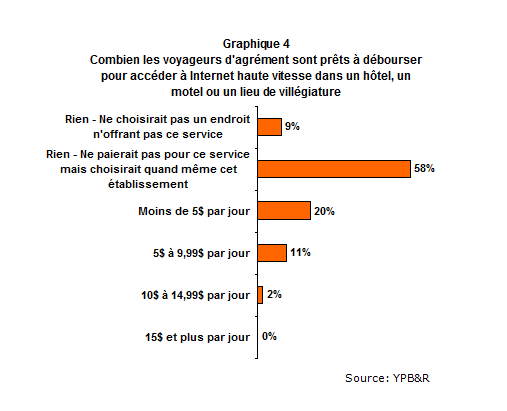 The majority, or 58%, of leisure travellers have less definite opinions: although they do not necessarily want to pay for internet access they would not change establishments in order to get it for free. However, 37% of business travellers would. Regardless of the type of travel, one out of five feels that $5 a day or less is an acceptable amount to pay for this type of service. Only 2% of tourists and 7% of business people would pay $10 or more. 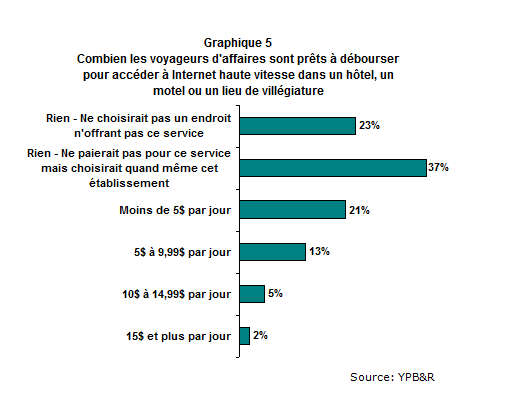 There is one final factor that only affects business travellers, and that is the availability of Internet access in conference rooms. Roughly 44% feel that high‑speed wireless service is very important when it is provided for free, compared to 24% who still think it is important even if there is a charge for that service. 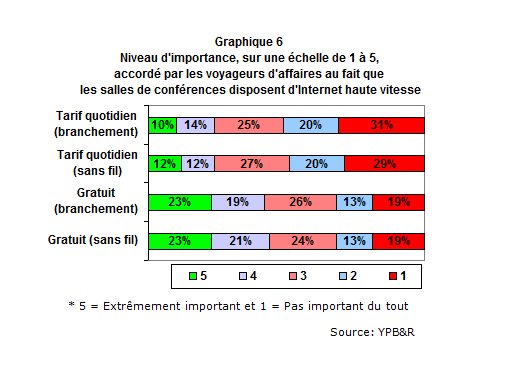 As the number of wi‑fi hotspots grows they will become an increasingly large part of consumers’ everyday life. In fact, a number of cities are working toward turning some of their neighbourhoods into wi‑fi areas, with either paid or free access. For instance, in September 2006, Toronto’s financial district went wireless. Industry players, particularly hotel owners, need to adapt to this trend because clients are becoming ever‑more demanding in that respect.