The resurgence of traditional travel agencies

The sector of so-called traditional travel agencies has probably undergone more upheaval than any other over the past decade. And yet, despite the popularity of the internet, the events of September 11, 2001, and the advent of zero commissions, agencies have learned to adapt, reinventing themselves in the process. Though many consumers have become devotees of online reservations, many remain faithful to the travel agencies that have continued to offer true added value. Some observed trends are presented in the following report prepared by Claude Péloquin of the Tourism Intelligence Network of the ESG-UQAM Chair in Tourism (University of Quebec at Montréal):

In the 1980s, travel agencies ruled the roost in the travel sector, booking approximately 80% of all plane tickets. In the mid-1990s, the tide turned as the airlines began reducing the commissions paid to agencies, only to cut them completely in the aftermath of 9/11. At the same time, new competition appeared in the form of online travel agencies that enabled consumers to easily reserve their own airline tickets.
This proved to be a turning point as agency sales truly plummeted. The extremely dire business environment led to major restructuring in the sector and between 1996 and 2006, the number of service outlets dropped 50%. After more than a decade of decline, the profession of travel agent is now regaining its status.

Of course, the perennial question among both consumers and travel insiders is: who offers the best price, travel agents or the internet? Unfortunately, there is no simple answer and many experts have offered contradictory opinions on the subject in the past few years. That said, it would seem that travel agents usually have easy access to the best prices found on the Web, or even better. However, price is not the only way in which agents must set themselves apart.

Competing directly with the internet, agents must offer added value to the customers who make the effort to consult them. In particular, consumers are looking for someone responsible should there be any problems. Although online agencies have made some progress in this respect, they still tend to be harder to reach and offer less reassurance. The help of an expert is very valuable when purchasing more complicated products or expensive trips, particularly those involving international travel.

Customer service: the key to success

The transition to zero commissions now seems complete. Travel agencies have regained the trust of a large percentage of customers and have improved their profitability, even though some of their activities, like simple transactions, have been taken over by the internet. Airline ticket sales, which often offer little added value in the way of customer service, have dropped dramatically. Customers who deal with agencies today are looking for more than what is easily found on the internet; people increasingly recognize the value of the travel agent’s work and agree to pay for this service.

Beyond the price, customers appreciate, for example, advice on selecting the best room, restaurant suggestions, good places to visit, or even how to obtain a possible upgrade. The quality of customer service has fostered consumer loyalty to the agencies and is how the best agencies distinguish themselves from the competition. The addition of new services has also helped retain customers; many occasional customers have gradually become partners of a sort, as a relationship of trust has grown.

More to the point, agents can make good use of the internet to help their customers. Many agents have become veritable experts who, instead of focussing on particular destinations, now increasingly specialize in specific customer segments (scuba diving aficionados, religious groups, recovered alcoholics, etc.).

The habits of Quebeckers

Although online sales have boomed in the past few years, the sales figures for Quebec travel agencies are also experiencing surprising growth. According to numbers from TourismExpress.com, Quebec retail agencies posted total sales of $2.83 billion in fiscal year 2006-2007, or a 9.4% increase over the preceding year. While the sector experienced a major consolidation of activities as the number of Quebec sales outlets dropped from 1308 in 1992 to only 812 today, average sales per agency location have risen 64% since 1999.

For a tour operator like Transat, the network of agencies clearly continues to play a leading role in the sale of its travel products. According to Transat’s co-founder, Linda DeCesare, 90% of the company’s sales still come from packages sold by agencies. Many customers now use the Internet to shop around, but still prefer to conduct their transactions in person with an agency.

A closer look at the reservation habits of Quebeckers shows they are more likely to use a travel agent when purchasing international travel (Figure 1). Over 44% of vacationing Quebeckers travelling by plane in Canada have used the services of an agent, compared to 58% of those vacationing outside the country. The difference is even more apparent when it comes to hotel reservations. Only 12% of Quebec vacationers asked an agent to book their accommodations within the country, while 35% requested assistance with international accommodations. 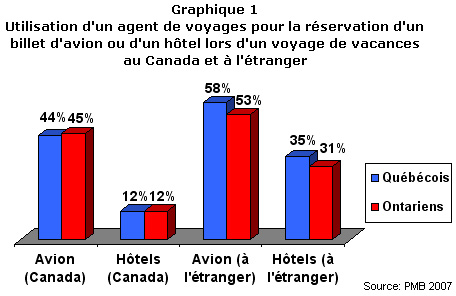 Ontario travellers behave similarly when it comes to domestic trips. However, when it comes to international travel, Ontarians are slightly less inclined than Quebeckers to call on the services of a travel agent.

Now asked to act more as travel consultants, agents have adapted their behaviour to this new reality. For example, they pay a lot more attention to discussions with their customers. Some agencies have taken the initiative of reorganizing their offices so they can receive people in a warm, welcoming environment. They increasingly use small private lounge areas to make the most of personalized meetings with their customers. The “service counter” approach has been replaced by the sales technique of sitting around a table.

During these pleasant discussions, many salespersons now adopt the tactic of complete transparency. With online computers available during the consultation, the consumer has direct access to the same information, at the same time as the agent. This strategy of openness has the virtue of creating a relationship of trust and showing the customer that the agent is working to build the trip with the customer’s input. A recent poll by Home-Based Travel Agent shows that a number of consultants now use the internet to conduct research or make bookings for their customers (Figure 2). 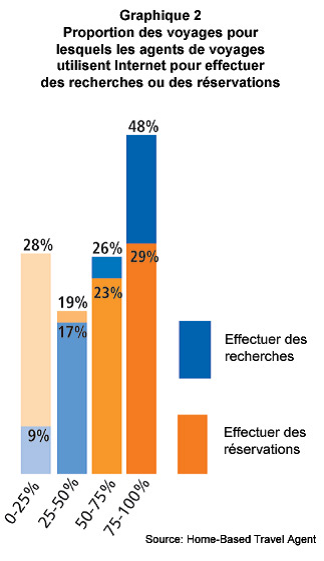 Agency offices are changing too

Many agency owners have jazzed up the appearance of their offices. A trend towards thematic décors has replaced the classic travel poster. Some European firms look more like art galleries than travel agencies. With this approach, design and décor are used to transport visitors to another world, before they even leave home. For example, some agencies feature large exotic trees, or appeal to the senses with scented teas, candles, perfume, etc. Sometimes, they even display imported water bottles from various countries.

Another emerging trend seems to be the sale of travel accessories. For example, the Voyageurs du Monde agencies in France present themselves not as agencies, but as experiences. They sell maps, GPS systems, books and other useful travel accessories. In Quebec, the Tourisme Jeunesse chain of agencies has adopted this approach for many years.

Some agencies have developed a cultural side to their products by organizing sales exhibitions of arts and crafts from around the world. These exhibitions attract new customers to the agency and enhance the décor. Other ways to stand out from the competition are activities like cocktail lectures and photography workshops.

After several years of major upheavals, it would seem that the distribution network is reaching a new equilibrium. The remaining traditional agencies are in a stronger position, the dizzying growth of online agency sales is rapidly slowing and suppliers like airline companies and hotel chains now attract consumers for simple transactions. However, we have learned from past experience that periods of calm never last for very long.