What is Facebook’s impact on the tourism industry?

In an earlier Globe-Veilleur article, we explained why Facebook has quickly become one of the top virtual communities and a new social phenomenon unto itself. We are now going to examine its sphere of influence within the tourism industry, as many Quebec businesses are starting to make use of it.

Some concrete examples from the industry

In its September edition of Cultur@, Tourisme Montréal discussed Facebook’s compatibility with the urban and culture sectors. Both sectors already attract the 18-35 year-old customer segment, which is also the most active demographic on Facebook. Many organizations are now using it to communicate with specific clienteles. For example, the Mutek group includes more than 300 fans of electronic music. These group members, in turn, have a multiplier effect. Les Rendez-vous du cinéma québécois has also made good use of Facebook, promoting the activities of this cultural event to its target public: a community of nearly 600 members, all devotees of Quebec film.

In the hotel sector, some establishments use it to promote one-time events like a networking happy hour, reunions or art exhibits. For example, Montreal’s the Place d’Armes and the Nelligan, both boutique hotels, use viral marketing to promote their activities and send invitations to potential clients. The owner of these establishments, Dimitri Antonopoulos, uses his own Facebook social network for this e-marketing and has obtained good results. Art galleries are adopting the same strategy to announce upcoming openings. Ski resorts are using Facebook to stimulate discussion among their keenest customers, promote their new season passes, etc. In all cases, it is essentially free advertising.More and more businesses are also using Facebook to recruit employees. Its structure makes it a valuable, easy-to-use tool for recruiting candidates based on their qualifications, current employer, professional title and geographic location. Professional networks can also be used to efficiently circulate information about an opening, while employees can use them to indicate their availability.

Many tourism-based businesses are developing applications

Many businesses are attracted to Facebook’s open platform, developing third-party applications (widgets) that users can add to their profile pages. There are already more than 4,000 such free applications of various types (including 131 associated with travel). The following are a few travel-related examples:

Although there are countless ways to find travel-related information on Facebook, another relevant aspect is its role as an “influencer.” Unlike travel review sites like TripAdvisor, Facebook acts as a tool for sharing travel experiences and tips from trusted acquaintances and friends. According to Patricia Brusha of the firm A Couple of Chicks, the viral effect of a network of friends can have a tremendous influence on travel decisions.

For better and for worse

Many observers are noting that the effectiveness of traditional online marketing channels, like advertising banners, is likely to decrease rapidly. The Facebook phenomenon is leading the way to a new reality: with so many Internet users actively commenting on brands via their social networks, a company’s reputation on the Web is becoming a major issue, particularly in tourism. According to a study published by UK firm Tamar (specialists in emarketing), travel brands comprise the sector most at risk from negative comments spread through social networks. Furthermore, the great majority (80%) of users of these networks noted that they had used the network as a podium to discuss or comment on a brand or product.

Take the example of Delta Airlines. Facebook has several dozen groups related to this company. Some are made up of Delta employees and communicate a rather positive image. Others, like “Delta Airlines Sucks” and “Warning: Do Not Fly With Delta Airlines,” are used primarily to express frustration with a bad experience and thereby damage the company’s image (see illustration). Other carriers like Air Canada and Air Transat are not immune to this trend either. 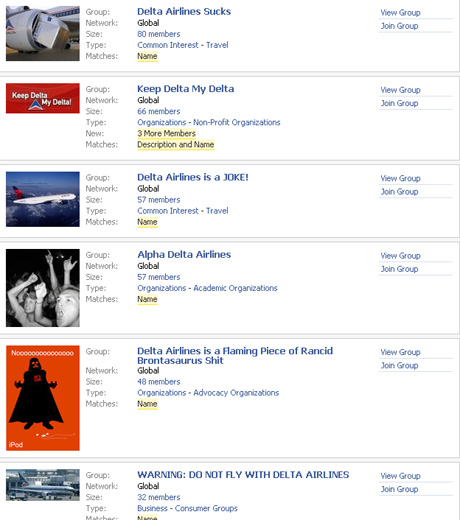 On the other hand, aficionados of a product, members of groups like “I Love Tremblant” and “Montreal – The best city in the world” (13,000 members), can become brand ambassadors par excellence. Ultimately, the influence of such groups depends on the relevance and truthfulness of the cause defended by their administrator and, above all, on the credibility and influence of its members.

Of course, the phenomenon is still very young and sceptics are probably right to say that Facebook has yet to prove itself and that some other site could eventually surpass it. In addition, concerns about data privacy could arise and dampen user enthusiasm. However, whether one is talking about Facebook or another leader in the field of social media, the fact remains that businesses who neglect these networks in the next few years or whose managers fail to understand the importance of these new mass communication tools will face a steady decline in their brand reach and influence.

See also:
– You haven’t heard the last of Web 2.0!
– Your client’s friends are your friends