Dollar (dis)parity is only part of the problem

Now the Canadian dollar has reached parity with its US counterpart, many questions are being raised. Without doubt, Canada’s performance in the American tourist market has been disappointing in recent years and the inexorable rise of the Canadian dollar in 2007 has only increased the level of anxiety in our industry. However, is our tourism deficit closely tied to the vagaries of the exchange rate? Is it a given that the flying loonie will aggravate our poor performance? By examining the issue from a broader perspective, we find that the reality is much more complex. We shouldn’t be too quick to blame all our tourism woes on the dollar exchange rate.

Concerns for the US market

The rise of the Canadian dollar in relation to that of Uncle Sam has been truly spectacular over the past five years. In 2002, the exchange rate for US$1.00 was CN$1.57 (average annual rate). For many years, the exchange rate was one of the incentives used to attract our neighbours from the south with slogans like “Stretch your dollar!” Clearly, the dollar’s sudden parity is of great concern, given that stakeholders across the board are looking for ways to stimulate this declining market, so key to the health of our tourism industry.

Since 2002, a record year for the number of American tourists in Canada, the numbers have been falling steadily, apart from a brief respite in 2004. And yet, is the exchange rate truly the prime culprit? Have we overestimated its influence on the travel behaviour of Americans?

To better understand and put into perspective how the exchange rate truly affects the travel decisions of Americans, we have compared changes in the value of the loonie with those of other currencies (see Figure 1). We have examined fluctuations in the US dollar since 1995 in relation to the Canadian dollar, the euro, the Mexican peso and the Japanese yen. At the same time, we have charted the annual number of US citizen international departures to Canada, Mexico and overseas. To make the data comparable, we have established 1995 as the reference year, with an index of 100. The lines in the graph below illustrate the increases and decreases noted in relation to the reference year. 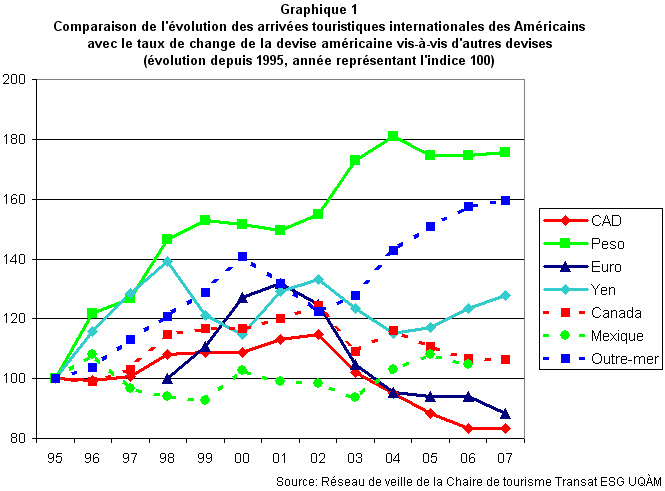 This graph shows the decline of the US dollar in relation to the Canadian dollar (red line) is much more dramatic than the drop in the number of American tourists to Canada (broken red line). The departures in question refer to stays of one night or more, as day trips have, in fact. recently dropped more precipitously.

It is a mistake to believe Americans no longer travel due to a combination of factors like a weak currency, security concerns, a turning inward, etc. The line tracking the number of Americans travelling overseas (broken blue line) eloquently shows that Americans are more interested than ever in discovering new destinations. For example, according to a survey of AAA travel agencies, reservations for US travellers to Eastern Europe jumped 55% in the summer of 2007.

Though there was certainly a temporary drop in the period immediately following 9/11, interest in far-flung destinations rebounded as of 2003. In fact, the euro is the most relevant currency in the analysis of how exchange rates influence US travel abroad (though we have included the yen for information purposes). Like that of the Canadian dollar, the euro’s value has appreciated significantly (dark blue line) vis-à-vis the US dollar since 2001. And yet, during the same period, the number of international departures from the US increased dramatically.

The example of Mexico

Mexico is a very interesting case because its geographic proximity to the US is similar to that of Canada. Unlike the Canadian dollar, the Mexican peso has been falling steadily in value against the US dollar since 1995 (green line). However, this growing purchasing power has not affected the decision to travel to Mexico, with the number of US tourists to the country remaining relatively flat (broken green line).

A closer look at two other indicators

A basic notion in economics is the idea of “All other things being equal.” This is often used as a premise when analyzing economic phenomena. However, in real life, all other things are never equal, a caveat that must be kept in mind when referring to the analytical model presented in Figure 1. 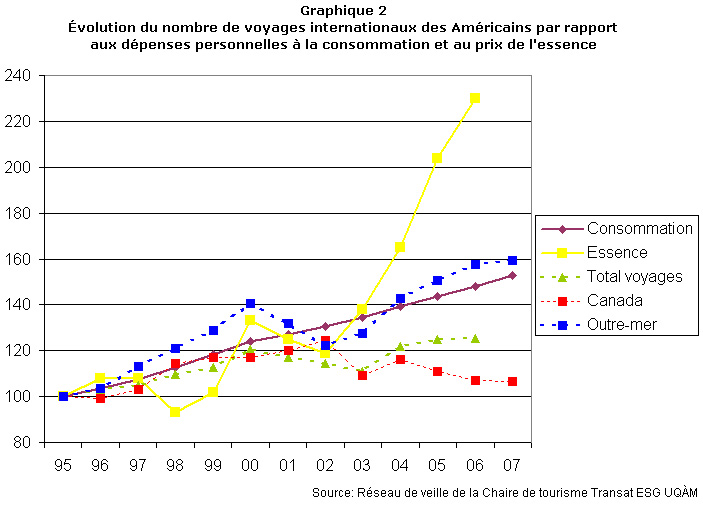 The travel intentions of citizens are often tied to their country’s economic performance. For this reason, we felt it was interesting to compare the change in the number of American tourists travelling to Canada and overseas with two other economic vectors: the level of personal consumer spending (purple line) and the price of gas (yellow line).

Without doubt, skyrocketing gas prices do nothing to encourage proximity tourism among Americans who usually travel to Canada by car. Over the past few years, the drop in the number of these travellers has been much more pronounced than the decrease in air travellers.

The change in US personal consumer spending is another interesting indicator of Americans’ ability and desire to spend. In fact, the graph shows that the significant increase in international departures is more or less in step with the spending indicator. Though our analysis may not be truly scientific, it does illustrate that Americans’ travel interests are evolving to the detriment of Canada.

Surveys show that the exchange rate can influence travel intentions, particularly among certain customer segments. When it comes to international travel, Americans demonstrate a lower sensitivity to currency fluctuations than Canadians.

Certain outside factors can enhance the potential impact of currency fluctuations. One such factor in particular is the media coverage lavished on the phenomenon; it would seem the Canadian media is more interested than the American media in the rise of our dollar.

It is also true that although Americans may not be very aware or influenced by the loss of their purchasing power, they definitely feel it once they reach their destination. The firm Moneris Solutions has studied US credit and bank card transactions at Canadian merchants. Total transactions in US dollars dropped in July and August 2007 compared to the same period in 2006.

This study did not take into account the number of visitors involved. Nonetheless, the numbers do indicate that spending budgets have dropped in a greater proportion than the number of American tourists. Other factors like falling room prices in 2007 also had an affect on the expenditure base. The study reveals the sectors most severely affected: specialized retailers (-35%), campgrounds and trailer parks (-22%), public golf courses (-14%), hotel reservations (-13%), bus travel (-13%) and restaurants (-8%)

Canada’s current difficulty recovering its share of the American market is deep-rooted and not due solely to economic factors. Other studies have reached the same conclusion: Americans no longer find Canada as attractive as they once did and would prefer to set their sights on new destinations. An unfavourable exchange rate and high gas prices are merely additions to the list of deterrents, particularly when it comes to proximity tourism. Now that our currency has reached parity, we must use innovation and an enriched tourism supply to change their minds!