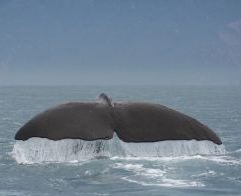 Whale watching is still the fastest growing sector of general wildlife tourism worldwide and this is important for Québec, since marine tourism is a lucrative activity. According to a recent report, 13 million people went whale watching in 119 countries in 2008, compared to 9 million in 87 countries in 1998.(1) In the past 10 years, the whale watching industry has grown at an average rate of 3.7% globally, although with slight variations. For example, it grew by 13% in Asia, Central America and the Caribbean, by 10% in South America, Oceania and the Pacific Islands and by 7% in Europe. Although North America remains the largest whale-watching destination as it hosts almost 50% of all whale watchers worldwide (Table 1), the sector’s growth there has slowed to 1.5% per year.

Québec in the context of Northeastern America

Marine wildlife observation, particularly whale watching, is a well established part of the nature experience in Québec and the hotspot for this remains the Saguenay-St. Lawrence Marine Park (SSLMP). In this area covering 1,245 km2, a variety of marine creatures (including rare species such as belugas and blue whales) can regularly be spotted, even in close proximity to the shore.

Although the number of whale watchers has grown internationally, a general decline has been observed in the last 10 years along the Atlantic coast of North America. Québec is an exception, posting modest growth between 1998 and 2008 (Figure 1). Meanwhile, fewer visitors participated in whale watching in neighbouring destinations, with numbers declining by 25% in New England but only slightly in Nova Scotia and New Brunswick. 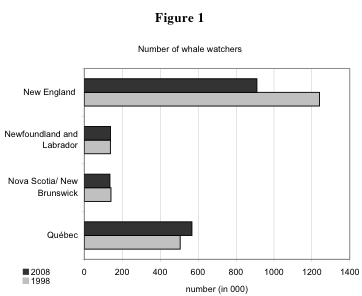 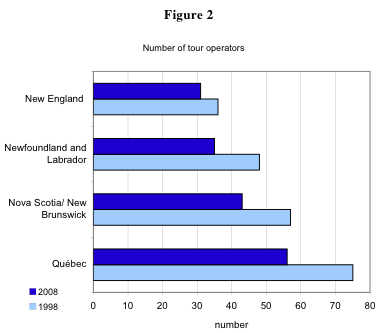 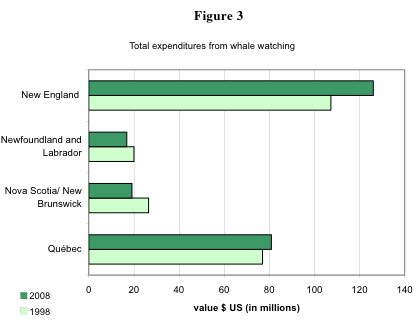 In the SSLMP area, statistics show that an estimated 274,000 visitors took part in commercial boat-based whale watching in 2005, while the number of kayakers was over 35,000 per year. A further 60,000 participated in land-based whale watching at various locations around the marine park. Although about 40% of visitors were on day trips, another 60% spent an average of 3.2 nights in the marine park area and 40% were repeat visitors. (2) Whale watching clearly has a positive economic impact, but tourism benefits the park’s resource management very little or not at all because tour companies are not required to spend any of their profits on conservation efforts.(3) However, a few tour companies are associated with GREMM, a non-profit organization dedicated to scientific research on the marine mammals of the St. Lawrence and education for the conservation of the marine environment. Visitors can contribute directly to GREMM’s efforts by becoming a member, visiting the museum in Tadoussac and participating in initiatives such as the ‘adopt a whale’ program. (4)

Although whale watchers are generally satisfied with their visit to the marine park,(5) there is also growing concern that the services offered are not entirely meeting demand, meaning a proportion of people may not be getting what they want out of their wildlife-viewing trip. According to recent visitor surveys, while visitors are generally very satisfied with the area, the educational component is weaker, with surveys showing only 46% of visitors are satisfied with their learning experience. This suggests that education and learning are not fully integrated into the visitor experiences currently offered. The fact that the majority of visitors observe wildlife from large motorized boats and cruise ships is an indication that marine wildlife viewing is very much oriented to “mass” nature tourism. Some visitors also express concerns that several tour boat operators seem to be chasing after whales.

Tourism is a closely monitored activity in the park and, since the implementation of special regulations in 2002,(6) amongst other measures, tour boat operators are required to have a permit, follow speed limits and respect distance requirements when approaching marine mammals. As belugas are endangered, they must be excluded from observation activities completely. At the present time, the tourism industry has been granted 59 observation permits, divided amongst some 16 companies. Although the marine park is vast, most boats leave from the quays at Baie-Sainte Catherine and Tadoussac, generating intense maritime traffic of about 80,000 trips per year. The resulting environmental impacts are numerous and include noise, traffic and collisions with marine mammals.(7)

The whale-watching industry has reached a certain maturity in Québec, compared to other destinations, although it appears to be a viable activity for now in the context of the North American Atlantic coast. Some of the issues raised in the Saguenay-St. Lawrence Marine Park suggest that the tourism sector could reassess its approach to operations management and work to find a balanced co-existence with conservation. It is in the industry’s interest to manage wildlife observation more responsibly, so perhaps there is a need for a sector-wide educational toolkit, as well as some voluntary measures, such as certification and a code of ethics for responsible operations.

The local tourism industry could also collectively reconsider how to positively contribute to the conservation value of the park, since it is a protected area and an industry hotspot. Other things to review include the type of experiences offered, and what actions could be taken to ensure that the interests of the growing, and more eco-conscious, responsible travel market are also met. The park and industry alike could benefit by making interpretation a more integral part of the visitor experiences offered. Besides teaching people about conservation issues, they could encourage a variety of other low-impact activities already offered in the wider Saguenay region, such as those along the Whale Route.