International cruises: Outlook for 2010 and overview of major trends

Hit hard by the economic crisis, the year 2009 was, for many sectors of the tourism industry, a catastrophic year. For the cruise industry, however, it was a year in which the number of passengers actually grew, fuelled by major cuts to cruise fares. As for 2010, the outlook is very positive: new ships, new clienteles, an increase in reservations and higher product prices. Major trends are coming to the industry: Web 2.0, sustainable development and a more international clientele. Here is a brief overview of the industry and its short-term prospects.

At a presentation given January 20, 2010, by Cruise Lines International Association (CLIA), Terry L. Dale and Richard E. Sasso, CLIA’s President & CEO, and Chairman, Marketing Committee, respectively, shared some forecasts for the year 2010. The number of passengers should reach 14.3 million, while there were 13.4 million in 2009. Fares will rise, but will remain lower than they were in 2008. The major deals offered during the winter of 2009 will not be repeated this year, but consumers will still be able to benefit from special promotions like shipboard credits, free plane ticket, 2 for 1 cruises, etc.

Cruise companies will launch 12 new ships in 2010, including the much anticipated Epic, Allure of the Seas and Disney Dream. A survey of CLIA member travel agents showed that they are extremely optimistic and expect to see the number of reservations rise in the next three years. In addition, according to another CLIA survey, 34 million Americans are planning to take a cruise some time between 2008 and 2011.

In other news, Alaska is experiencing tremendous difficulty because a majority of cruise lines have announced they will redeploy ships from Alaska to other locations in the next two years. If this trend continues, the Alaska Travel Industry Association expects the number of passengers to fall by 140,000 in 2010, dropping to a total of 860,000 travellers.

Most cruise lines now use social media on a daily basis in their marketing campaigns. One such example is Royal Caribbean’s launch of Oasis of the Seas in the fall of 2009.  The company started by setting up an entire Website devoted to the new ship where visitors could follow the progress of the construction in real time. Numerous videos were posted to the site, showing everything from the ship’s maiden voyage to a presentation of onboard activities. Furthermore, its risky passage underneath the Storebaelt Bridge in Denmark engendered enormous interest on the Web. The “Reporter at Sea” online contest was also organized to find citizen journalists to cover the launch. In total, the site received some 4.8 million unique visitors. 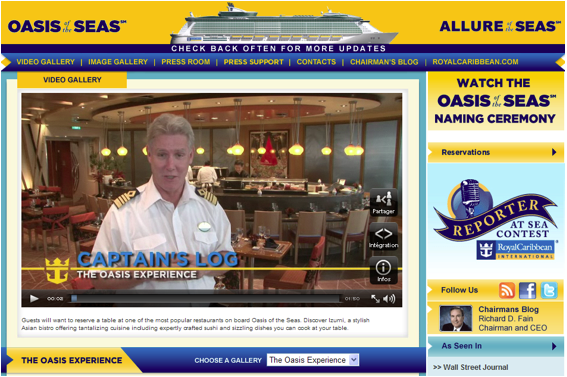 Another extremely popular site is the blog written by John Heald, Senior Cruise Director, Carnival Cruise Lines. It is so successful that he was able to organize two thematic cruises in 2009, solely for his readers. Most cruise lines, as well as many ports of call, now maintain Twitter and Facebook profiles.

The trend towards sustainable cruising

Sustainable development is also becoming a major concern of consumers as well as cruise lines and destinations. Eco-cruising is increasingly popular and can significantly improve a destination’s market position. The Ecoventura, for example, is a ship that uses solar panels and wind turbines on its cruises in the Galapagos, and the ports of Los Angeles, Seattle and Vancouver now offer dockside power.

The phenomenon has also influenced the shore excursions developed. Costa Cruises created 240 eco-excursions to reduce its environmental impact. Furthermore, the Baltic Sea region has implemented a major environmental program. Among other things, it plans to equip all ports with an onshore power supply (OPS).

Finally, a major legislative change will force cruise lines to use low-sulphur diesel fuels when travelling within 200 nautical miles of the coasts of Canada and the United States (see Nouvelle réglementation sur la pollution de l’air par les compagnies de croisières: un désastre financier?). The industry is obviously concerned about the passage of this legislation, primarily for economic reasons such as the profitability of routes through the protected area, but also because of the limited availability of such fuels.

Several indicators have changed somewhat in the last few years, due to the economic crisis. For example, consumers are now more price-sensitive when shopping for cruise packages so cruise lines are trying to outdo each other to create the most interesting packages. The phenomenon has also led destinations to offer economic incentives. Ukrainian ports are offering a 50% discount on port fees for every stopover during the winter of 2010. Price sensitivity is also the reason that there are now more ports of embarkation, since travellers increasingly want to be within driving distance of their departure location. In addition, the cruise booking window between the date of purchase and the date of departure has shortened, dropping from 5.6 months in 2008 to 4.6 in 2009.

Cruise passengers are increasingly experienced. They have sailed the Caribbean, visited Alaska and travelled along the West Coast of the United States. They are seeking new destinations, which is why the industry is currently witnessing the emergence of destinations in the Middle East, Southeast Asia and Australia. The increased popularity of European cruises is also an offshoot of this situation, with river cruising a booming market. Member agents of the CLIA report that 34% of clients are very interested in river cruising. In 2008, the number of beds available in Europe was 71,300, an increase of 15% compared to 2007 and 62% more compared to 2005.

Other trends observed are the popularity of theme cruises, primarily those focussed on food and wine, as well as the success of private and cultural shore excursions. A new type of excursion that is becoming popular is the extended “mid-cruise” excursion, which enables visitors to spend several days in a single location. Silversea Cruises has announced they will offer 40 such excursions in 2010.

The clientele for cruises is gradually becoming more diverse. Although the vast majority of cruise passengers are American, the proportion of those from other countries is rapidly rising. In fact, out of 13.4 million cruise passengers in 2009, 23.5% came from outside North America, compared to only 10% in 2000. Furthermore, more Canadians are going to sea; some 775,000 took a cruise in 2009, a 9% increase over 2008. Canadians now account for one-quarter of non-American cruise passengers.

Now that the worst of the economic crisis is over, forecasts for the coming years are very optimistic. The trends affecting the cruise industry are much the same as those affecting other tourism sectors: sustainable development, social media, increasingly informed and experienced consumers, etc. The industry has already proved it is resilient and can quickly adapt to change. Will the rest of us be able to go with the flow?