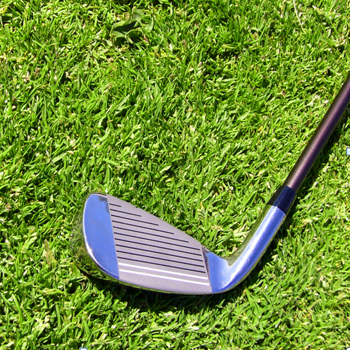 As far as environmental responsibility is concerned, golf is neither ahead, nor behind other sectors, and it may take some time before it is considered as ‘responsible recreation’. Golf courses have a long history of being environmentally unfriendly, due to their high water and chemical use, impact on local topography, hydrology and wildlife.1

Nonetheless, golf remains an important activity across Québec’s 362 golf clubs, while worldwide an estimated 25,000 golf courses cater to some 50 million players. Internationally, various organizations and initiatives exist to reduce golf’s environmental impact, but one of the most popular remains the Audubon Cooperative Sanctuary Program. In 2009, 783 golf courses were certified by this program worldwide, including 82 in Canada and 11 in Québec.2

Golf courses that have implemented initiatives to reduce their environmental impact can be recognized by a variety of actions, including:

Where such environmental actions have been implemented, golf course managers have generally also reported a positive business value or cost savings, according to Audubon International assessments.3

Currently, there is no information that systematically documents environmental improvements implemented by Québec golf courses. However, numerous golf courses are actively working towards reducing their negative environmental impact, while several are also in process of certification by Audubon International. The most prevalent positive environmental action presently in Québec remains the reduction of pesticide use, owing to legislation implemented back in 2003 by the Provincial Government.4 According to baseline assessments for the period 2003-2005, Québec’s golf sector used 39,382 kg of active ingredients per year (according to sales figures) and 75.9%, or 29,885 kg, in the form of fungicides.5 In comparison with total pesticide use in the Province, pesticide use by golf represented about 1.1% of the total. The continuous reductions in pesticide use remains important to maintain watershed ecosystem health, but especially since their application by golf courses in Québec occurs almost entirely on permeable soils.

Since 2003, the Québec Pesticides Management Code and its associated regulations require all Québec golf courses to submit a pesticide reduction plan prepared by a certified agronomist to the ministère du Développement durable, de l’Environnement et des Parcs every three years.4 For the period 2006-2009, the objective was to achieve average reductions of 12.9% in the use of fungicides, 9.4% in herbicides, 8.2% in insecticides, 7.4% in rodenticides and 2.8% in growth regulators. The results are currently being analyzed and the objectives for the next three years will be revised in 2010.

Though golf courses in Québec have taken numerous other actions to improve their environmental management, the overall impact of these is not documented, with the exception of the Laurentides, where water use is monitored by public sector organizations. A few golf courses have also installed industrial equipment to filter, treat and reuse wastewater. However, such initiatives are limited to only a few places, since they cost up to CAD 200,000. Elsewhere, golf courses have exchanged their carts for electric versions, implemented recycling programs, and use recyclable or biodegradable balls and tees. Increasingly, some golf courses supply their restaurants with local and regional foods, as in the case of the Rawdon Golf Club, which also received Le Phénix de l’environnement Award in 2009 for having implemented a variety of initiatives to improve its environmental management.6

While there aren’t clearly any 100% eco-friendly golf courses, work is under way to improve management at some places. There is currently a move in Québec to implement a variety of voluntary initiatives in 2010. For example, the Association des terrains de golf du Québec is drafting a sustainable development policy and green program, which will address comprehensive environmental management requirements covering a range of issues, including waste and water management (composting, recycling), hazardous substance use, vegetation around waterways and others. A number of other organizations, such as the Coalition for Responsible Golf, are also working to help golf courses improve their environmental management practices in Québec.

What about green golfers?

Few studies have assessed golfers’ attitudes towards the environment, and none have been reported from Québec. However, in 2008, Golf Digest published a survey that illustrated how perceptions of 650 avid golfers compared with the general American population regarding golf and its relationship with the environment.7 According to this study, golfers were typically male, affluent and older than the general population surveyed and some similarities and differences were noted amongst the two groups concerning environmental attitudes. For example, both groups appeared environmentally conscious and participated in activities like recycling and agreed that government regulation is a necessary approach for addressing environmental issues. However, while golfers also appeared to support the idea that golf is an environmentally friendly/compatible sport, they were less likely than the general population to participate in initiatives such as carpooling. Figure 1 summarizes some of the attitudes towards specific impacts linked to water and pesticide use, which suggests that fewer golfers believe the game’s water and pesticide use has a negative impact on the environment than the general population. The Golf Digest study 7 also suggests that, while golfers agree with the need to improve the environmental management of golf courses, such improvement does not necessarily represent a big plus for increased participation in the game. 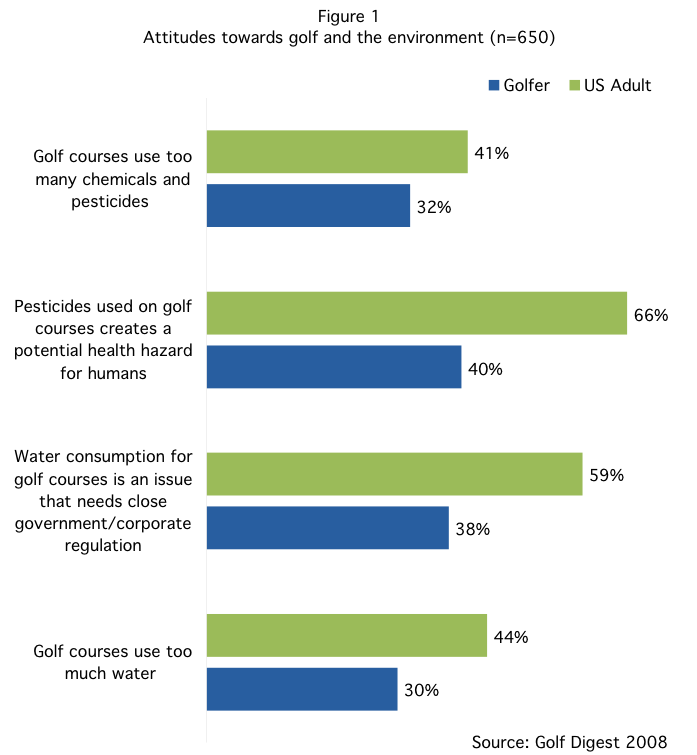 Some golf courses are also focussing on player education to raise environmental awareness and several try to get players involved by having them volunteer to carry out restoration and environmental works, while others encourage the provision of financial support towards environment initiatives.

Golf clearly has the potential to be more environmentally responsible and the numerous initiatives in place by some golf courses currently leave no room for inaction by the great majority.