The flow of tourists to various destinations around the world has changed drastically in recent years and data compiled over the past decade corroborates certain trends. New outbound markets occupy the top spots and the ranking of destinations has been turned upside down. Emerging economies are profoundly altering the global tourism market, which is now shared amongst a much greater number of countries than before.

According to World Tourism Organization (WTO) estimates, the number of international tourist arrivals reached 940 million in 2010, or a 39% increase over 2000. Seen over the longer term, growth has been exponential; only 25 million tourists travelled in 1950.

Since the WTO compiles national statistics, methodologies may vary. For this reason, results must be interpreted with caution. In addition, results for the year 2010 were estimated based on partial data.

Not only has the ranking of destinations changed dramatically over the years, the sheer number of countries visited by tourists has increased tremendously. Here are some interesting observations about the number of international arrivals at the most popular destinations (Table 1): 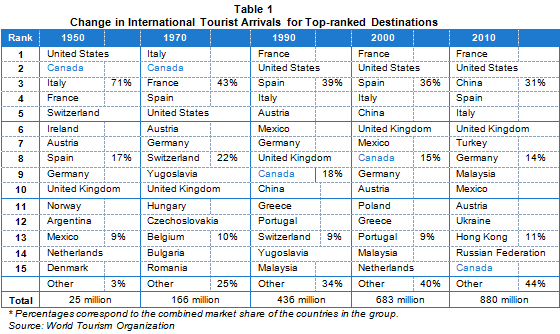 The top six destinations have remained been more or less the same since the year 2000. France enjoys a comfortable lead and China – which outranked Spain in 2010 – is now closing in on the United States. Canada has not been one of the top ten destinations since 2004.

Graphs 1 and 2 illustrate, respectively, the top 20 destinations by international tourist arrivals and by international tourism receipts. The two rankings differ somewhat. In terms of tourism receipts, the United States is in the top position, well ahead of second-ranked Spain, which also outranks France. While some countries occupy similar rankings in both graphs, others appear in one and are completely absent from the other. Countries that rank in the top 20 of arrivals but not in receipts are the Russian Federation (27th), Poland (30th), Ukraine (50th), Greece (21st) and Egypt (22nd). Conversely, some countries have high tourism receipts for a relatively lower number of visitors: the Netherlands (21st), Switzerland (28th), Japan (29th), Australia (41st) and India (42nd). 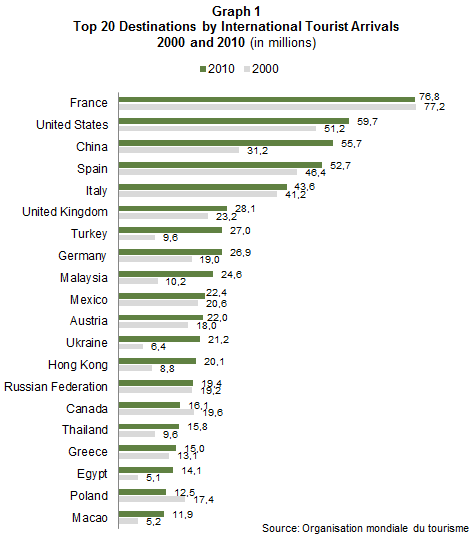 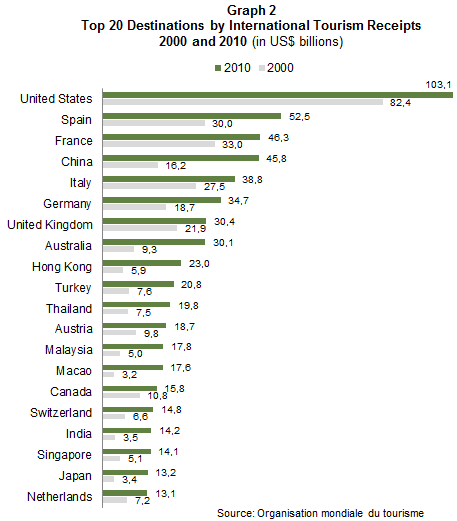 In fact, not all countries have benefitted from the overall growth in international tourist arrivals. Graph 3 illustratesthe change in arrivals for various countries. While some have more than doubled the number of arrivals, others, like Canada (-18%) and Poland (-28%), have recorded major decreases. 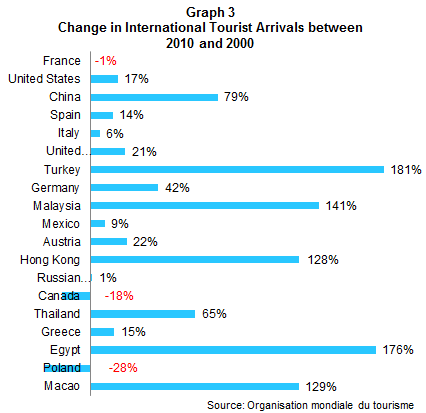 Where do most travellers come from?

Europe is currently the top source market for tourists, generating 55% of all international tourists, followed by Asia and the Pacific (20%) and the Americas (16%) (Table 2). Asia and the Pacific, the Middle East and Africa recorded the strongest average annual growth rate for the period covered. The majority of international visitors, approximately four out of five, travel within their own region. However, it would appear that the number of trips from one region to another has increasedat a faster rate than the number of intraregional trips. Industrialized countries remain the primary source markets of international tourists. However, with the increase in disposable income, many emerging economies have experienced higher growth rates in the past few years. 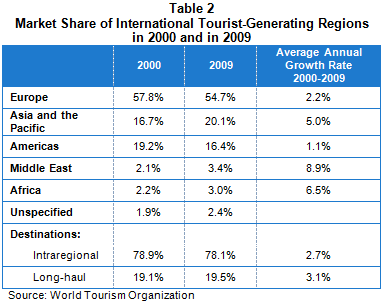 The top three spots have been occupied by Germany, the United States and the United Kingdom since 2000, with France, Italy and Japan following close behind.The explosive growth of the Chinese travel industryhas pushed it into the top five even though its population has only just begun to travel. Chinabegan signing agreements in 1999 to permit leisure travel to various countries, but Canada has only very recently obtained the status of an authorized destination (June 2010). The Chinese still travel a lot within their own country, but the proportion of domestic trips to those outside the country has risen from 71 to 1 in 2000 to 38 to 1 in 2009.

Japan is the only country in the ranking below to have reduced its international tourism expenditures. Hard-hit by economic woes and fuel prices, the population has lost some confidence and travels less than before.

The Russian Federation, Saudi Arabia, Belgium, Australia, Singapore, Norway and Brazil more than doubled their spending during this period. 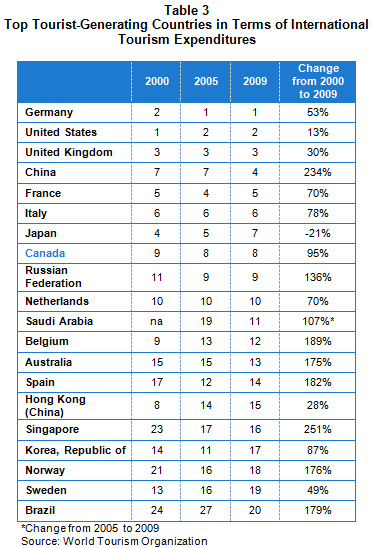 In short, the tourism market is constantly changing and welcoming more participants so it is easy to get lost in the crowd. The good news? The number of tourists from various regions around the world is growing constantly. We live in an age where physical distances are less intimidating than before and where tourists are choosing to travel just about everywhere. We must design our tourismstrategies to reflect a broader geographic perspective and not be afraid to compete with top-ranked destinations.