Facts and figures, Products and activities,

The rising popularity of snowshoeing

Snowshoeing has been on the upswing of late, with the majority of snowshoers having taken up the sport in the last five years. Among young adult participants (aged 18 to 24), many have only a year or two of experience and seem to enjoy the activity as an ideal opportunity to socialize with friends and family. Snowshoers have many interests and are keen to explore! What follows is a summary of their interests and habits. 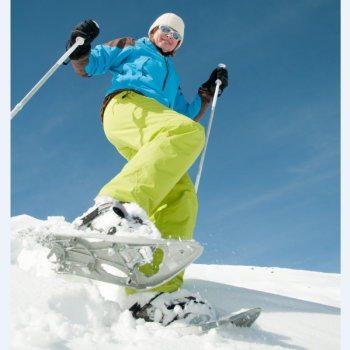 The Transat Chair in Tourism, Sépaq and several regional and sector-based tourism associations recently conducted a survey on the recreational habits and travel behaviours of cross-country skiers and snowshoers. The following data were taken from a sample of 373 respondents who had used Quebec snowshoeing trails over the course of winter 2011-2012. Of these respondents, 95% lived in the province. In some cases, it is interesting to compare the snowshoer’s profile with that of the cross-country skier.

Enjoying the great outdoors as a couple or with friends

The pastime of snowshoeing primarily attracts individuals aged 45 to 54 (Figure 1), but it is also popular among young women aged 25 to 34 (26%). 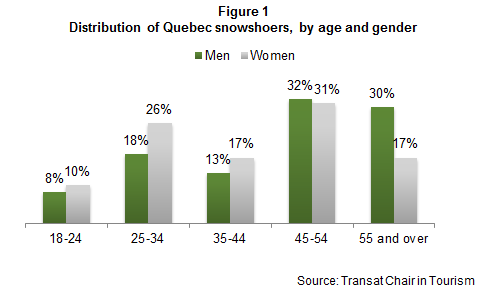 Although a quarter of respondents have been snowshoeing for two years or less, nearly a third have engaged in the sport for at least ten years (Figure 2)[ES-C1] . Most participants usually go out three to nine times per year (53%), but nearly one-third (32%) slip on their snowshoes more than 10 or even up to 20 times each winter. 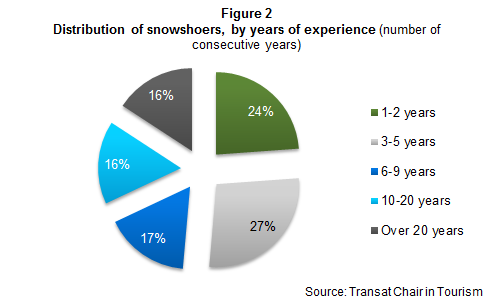 More than half of respondents usually go snowshoeing with their spouse (this is especially true of those aged 45 and up) and 50% go with friends (Figure 3)[ES-C2] . Among young people aged 25 to 34, 63% snowshoe primarily with friends. 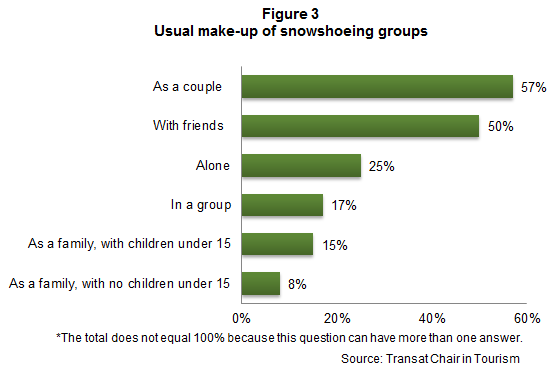 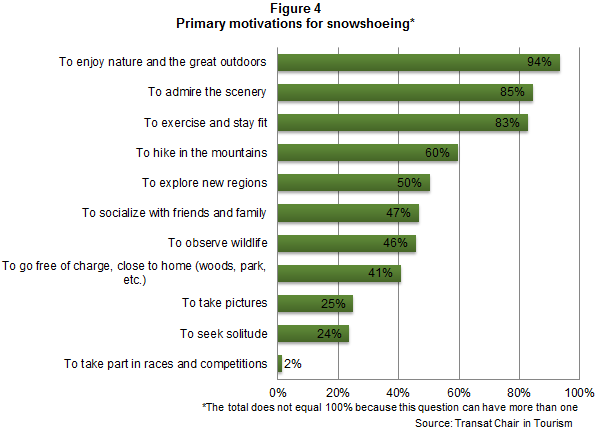 Winter walking, ice skating, cross-country skiing and downhill skiing are other winter activities enjoyed by snowshoers. However, one quarter of enthusiasts prefer to devote themselves solely to snowshoeing (Figure 5). 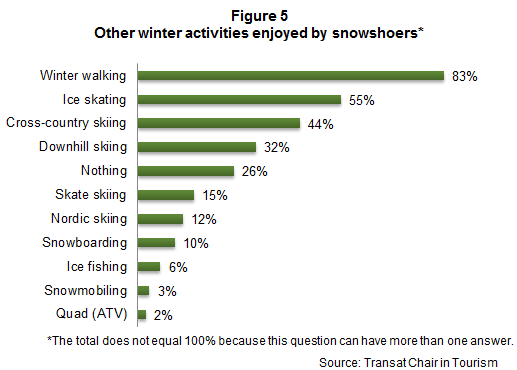 Snowshoers and their most recent excursion

The Quebec City region attracted a high percentage of all snowshoers (29% of respondents had taken its trails), followed by the Eastern Townships (20%) and the Laurentians (18%) (Figure 6). 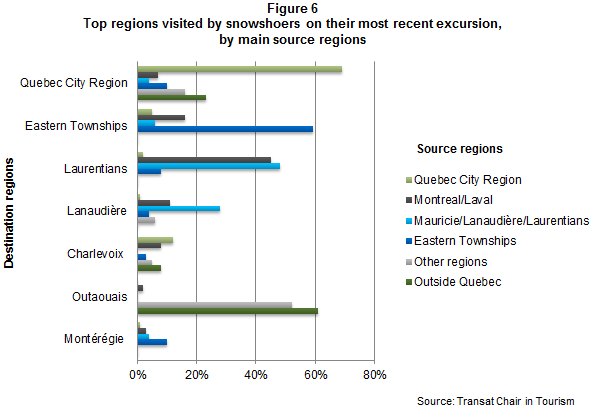 On their most recent excursion, more than one snowshoer out of four (26%) visited the region for the first time, indicating that participants tend towards repeat visits.

When asked about their most recent snowshoeing excursion, more than half of respondents (56%) stated they were already familiar with the destination. Furthermore, 38% either sought advice from friends and family or consulted the Internet, in equal numbers. They began their research by seeking information about the trails and services offered by the various national parks (62%), then turned to general search engines (Figure 7). 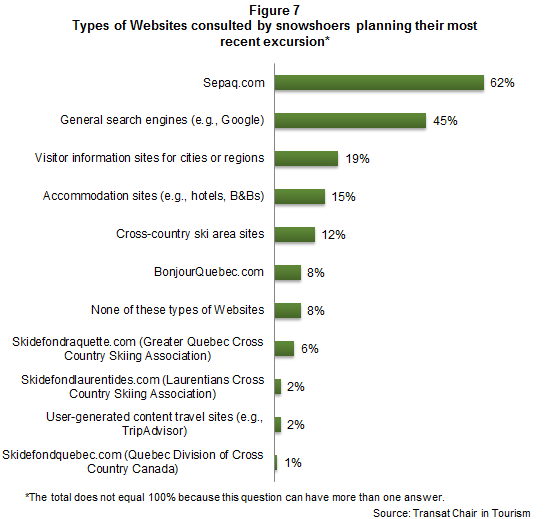 Among snowshoers who surfed the Web, the majority looked for practical information (trail maps, location, services) before seeking out area activities and attractions (Figure 8). Unlike cross-country skiers, snowshoers were more influenced by promotional offers (41%) and the variety of on-site experiences. 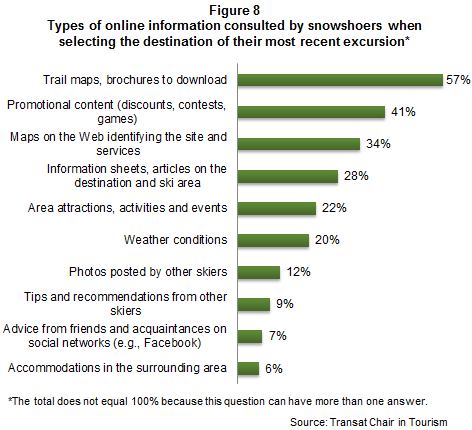 Nearly one out of two respondents (47%) chose a destination close to home, travelling only a short distance (less than 40 km) to reach it. However, more than one out of four travelled over 100 km (Figure 9). With an average travel distance of some 73 km to their starting point, snowshoers appear somewhat mobile. 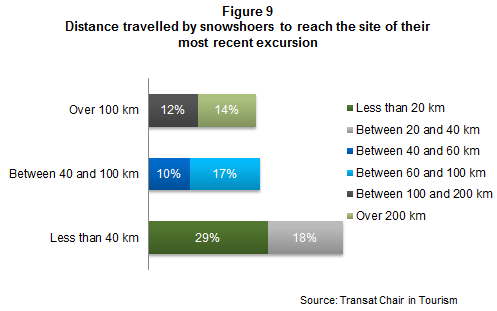 During their most recent excursion, most respondents snowshoed for three hours or less, but 43% did go out for more than three and, in some cases, up to five hours (Figure 10). Like hikers, snowshoers like to take their time and linger on-site, which is conducive to observing nature and sharing experiences with friends and family. 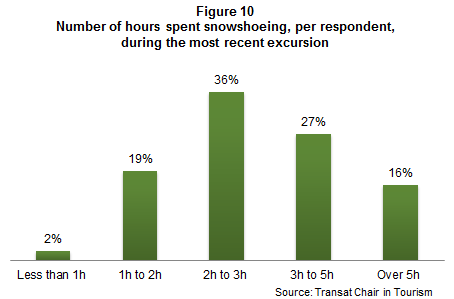 Furthermore, while many respondents opted to snowshoe with just one other person (43%), group outings were also popular. One snowshoer out of three was accompanied by two to four people (34%), while one in seven was in a group of more than five individuals (14%).

How can destinations attract these visitors?

Snowshoers demonstrated an obvious interest in the following criteria:

The search for multiple activities

More than two snowshoers out of five (42%) would be willing to engage in additional activities and about the same percentage (40%) would be likely to prolong their visit if they could dine on-site. Also, evening events seem to attract snowshoers (36%) even more than cross-country skiers (27%), as do guided tours (23% compared to 17%).

A growing pastime with a diverse clientele, snowshoeing presents an opportunity for businesses who would like to improve, diversify and complement their existing products. Are you ready to welcome snowshoers this winter?