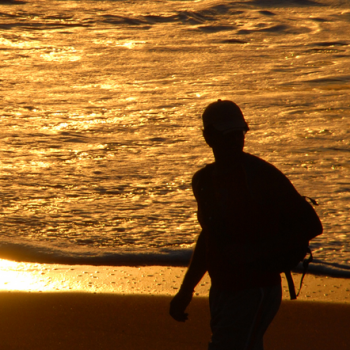 Solo travellers come in all different types and the Quebec tourism industry must adapt to attract this booming clientele. Although solo tourists obviously travel alone, they often travel in groups, as contradictory as this may seem. In fact, many travel specialists (tour operators and DMOs) are noticing that solo travellers wanting to experience new places with other people who share their interests now constitute a larger proportion of their group clientele.

Single travellers are a growing market segment. More and more people are single by choice at various stages of life because of marrying later, getting divorced, losing a spouse, etc., contributing to the rise in one-person households:

A solo traveller is, by definition, a person travelling alone… but not always! According to Statistics Canada, a person is considered to be “travelling alone” if not accompanied by another member of the same household; for example, people travelling with friends or in a group are considered solo travellers if they are unable to provide any information on the expenditures and activities of the people accompanying them.

With this in mind, researchers from the University of St. Gallen in Switzerland have identified four categories of solo travellers:

Here are some characteristics of these different categories (see Table 1): 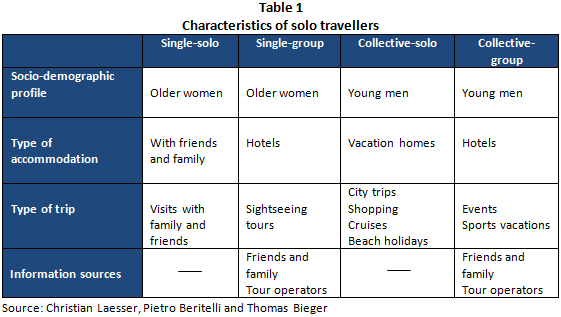 In this section, we have chosen to examine only individuals travelling alone, not in a group of any kind.

In 2010, Canadians who travelled alone in Quebec made nearly three million leisure person-trips of one or more nights, accounting for 34% of all stays. Note that Quebeckers made up 83% of these solo travellers.

On average, one out of five leisure visitors from the top European tourist-generating countries who visited Quebec for one or more nights in 2011 travelled alone, while among Chinese and Brazilian tourists, these visitors made up the majority, or 60%.

Finally, from 2006 to 2011, the number of solo travellers from overseas and the U.S. recorded very strong growth (21% and 55%), while total arrivals fell. This was particularly remarkable in the case of American travellers (see Table 2).

Many tour operators such as Abercrombie & Kent, a company specialized in luxury travel and safaris, have eliminated supplements for solo travellers or reduced such fees by 50 to 75%. Other companies offer to find their solo clients a roommate and then reduce their rate by 50%.

Many cruise lines have also done away with the single supplement or reduced it for certain cabin categories — often the least expensive — or specific destinations. In 2010, Norwegian Cruise Line (NCL) was the first to offer 128 studio-style cabins for solo travellers at no extra cost on the Norwegian Epic. It also created a lounge area designed especially for solo travellers to socialize. These individual cabins have been so successful that NCL has decided to offer another 59 studios on the Norwegian Breakaway, which sets sail in May 2013.

Tour operators like Singles Travel International have created a social network where solo travellers of all stripes can do things like share their interests, favourite activities and destinations visited and meet potential travel partners. Airlines such as Air Baltic, KLM and Malaysia Airlines and new applications (SeatID,

Planely, Facebelt) enable solo travellers to select a seatmate based on their social network profile. Others, like Maiden Voyage, are a network of for female business travellers who would like to network and socialize at their destination. How will you take steps to attract this clientele?

– Statistics Canada. “International Travel Survey” and “Travel Survey of Residents of Canada,” 2007 to 2011.