How can one use art, heritage, design, and outdoor activities to promote a body of water? The Quebec Association of Landscape Architects Annual Congress was full of ideas and projects, all focussed on tourism. 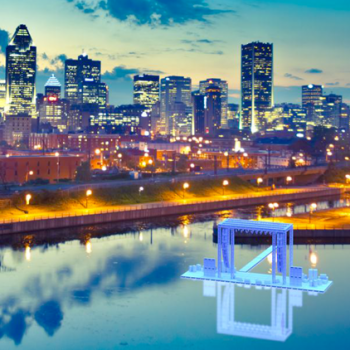 Tilman Latz, a German landscape architect and urban planner, enjoys the energy of the Old Port of Montreal, where old grain elevators stand alongside housing and recreational facilities. Alexander Reford, Director of the Reford Gardens, feels that the maritime landscape in the Gaspé is rather empty and could use more ambiance and boating activities. Daniel Blier, Executive Director of Parc Jean-Drapeau, wants visitors to be able to roll up their pants and put their feet in the water, like they now can in New York and Lyon. These are just a few examples of the many ideas and projects shared during Tourism + Landscape, the Annual Congress of the Quebec Association of Landscape Architects (AAPQ), held in Montreal on April 4-5, 2014.

No shortage of projects

A floating event space will be created on the Lachine Canal this spring. Measuring 24 by 11 metres, the venue will be suitable for various types of events: outdoor movie screenings, concerts and receptions for up to 200 people. Project developer Simon Lebrun hopes to make the structure a permanent feature that could be moved anywhere within the Lachine Canal, according to the client’s needs. Mr. Lebrun is also the founder of Heritage Maritime Canada, an organization devoted to promoting marine heritage, as well as the organizer of the Bota Bota Montreal Ice Canoe Challenge and other festive events in the Old Port.

On the Magdalen Islands, the firm of Bourgeois/Lechasseur Architectes has created structures inspired by the sea and the islands to showcase the archipelago. The Place des gens de mer, on Cap-aux-Meules, marks the beginning of an island trail comprising 12 outdoor sites. Constructed on the site of an old fish processing plant, a symbol of an iconic local industry, this public plaza is the starting point for exploring all the islands. Authorities also hope to make it a popular gathering place. It will host the farmer’s market and the future seamen’s memorial. Access corridors have also been created to connect the centre of town with the coastal trail. 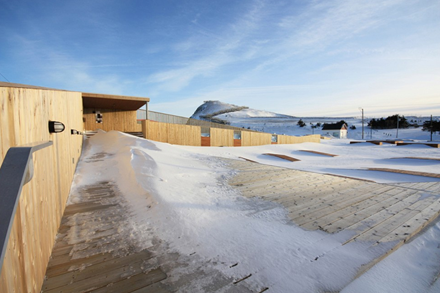 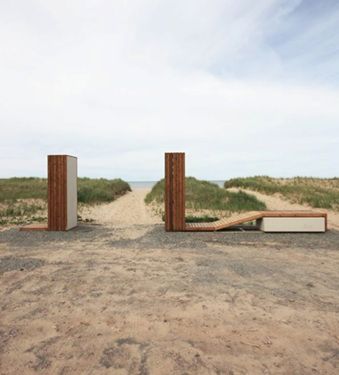 The Rivière-des-Prairies–Pointe-aux-Trembles borough has adopted a “blue-green plan” to showcase its waterfront. According to its mayor, Chantal Rouleau, it is important to change the image of east-end Montreal by making the most of its location on the shores of the St. Lawrence and Des Prairies rivers. The plan includes a project to create “windows” or openings overlooking the rivers every 500 metres and sites with public access to the water. The mayor noted that 24 dead-end streets could very well offer vistas of the water. It will not require much: remove some concrete blocks, do a little weeding and install some street furniture.

The borough launched a design competition for the Plage de l’Est, which is also a key element in the blue-green plan. The firms Ruccolo + Faubert Architectes and Ni conception architecture de paysage came up with the winning proposal, a universally accessible site that provides visitors with a special connection to the St. Lawrence River. 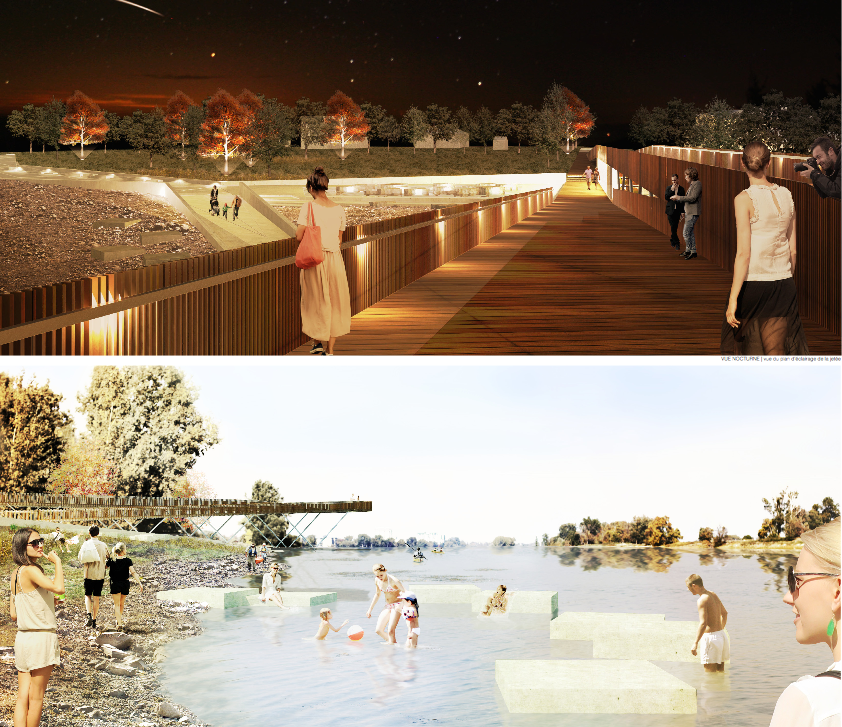 Jean Blaise, Director of the organization Le Voyage à Nantes, noted that the city of Nantes leverages heritage and culture to enhance its attractiveness. To better underscore the connection between the city and its neighbour, Saint-Nazaire, Nantes invited artists to interpret the landscape along the banks of the 60-kilometre estuary flowing between them. The permanent collection is made up of 29 works forming a trail along the Loire that is open to visitors year-round. Each creation focusses on an unusual or noteworthy site in the area. The images below illustrate some works from the Estuary project’s permanent exhibition. 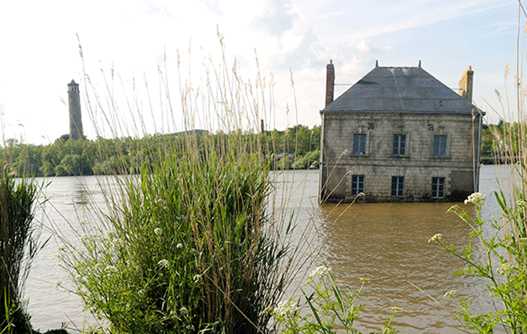 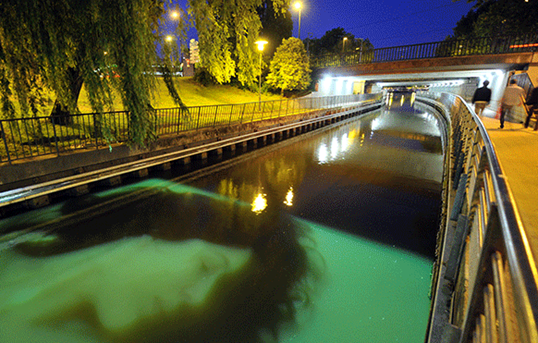 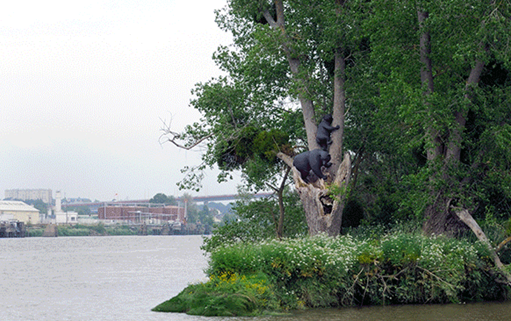 In the past decade, the post-industrial wasteland of this East River waterfront area has been transformed into an exceptional urban park with elements connecting the city to the river, such as a kayak launch. In addition to spectacular views of Manhattan, Brooklyn Bridge Park offers a wide variety of programs, outdoor recreational facilities and venues for major events along more than two kilometres of riverfront. The park’s diverse facilities and integrated industrial heritage have earned a number of awards for Michael Van Valkenburgh Associates, Inc., designer of the long-term project’s master plan. 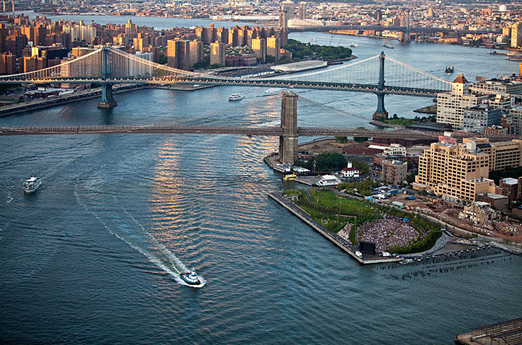 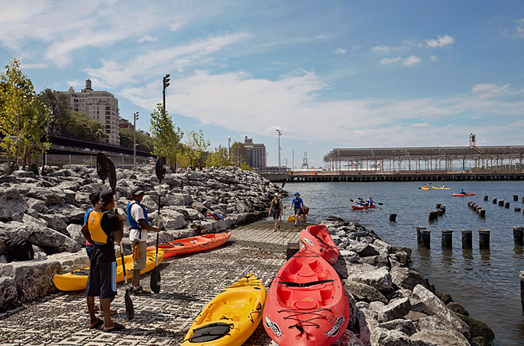 Many other inspiring projects were discussed at the AAPQ’s Annual Congress. The combination of creative Quebec professionals and foreign sources of inspiration generated ideas that could support the strategy developed by Tourisme Québec and its many partners to raise the profile of the St. Lawrence. To achieve its mission, this strategy requires a multidisciplinary approach and, above all, the support of local communities.