Choosing the Most Outstanding Attractions 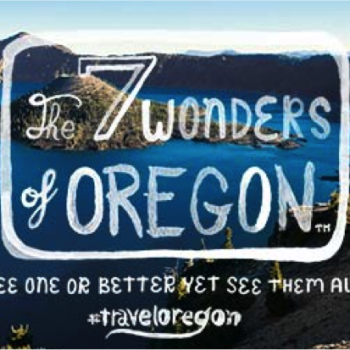 Rather than letting potential visitors browse through hundreds of offers to get a feel for the place, destinations are taking a more proactive approach. They have started showcasing only their flagship products to inspire visitors, spark the imagination and get them dreaming. Visitors to the destination’s website will learn at a glance what makes that place distinctive, and will create an enduring mental image for themselves.

Trying to focus on everything the destination offers decreases the impact of its message. However, crafting a more targeted message designed to create a strong first impression necessarily involves choices. Some destinations have managed this feat brilliantly and are now turning their attention to secondary tourist products related to these primary attractions. Ultimately, the entire tourism industry wins. Here are some examples.

The Seven Wonders of Oregon

In 2013, the Travel Oregon destination marketing organization launched the Seven Wonders of Oregon campaign that focussed specifically on seven of the Western U.S. state’s iconic natural attractions. Thereafter, all the state’s marketing tools and initiatives were centred on those seven attractions. Visitors are encouraged to come or return to Oregon to see them all, in other words, to “collect” them. Campaigns for each of the individual attractions cast a much wider net by presenting the surrounding attractions. The following video describes the idea behind the campaign and provides a teaser about each of the Seven Wonders themselves.

In 2014 and 2015, Travel Oregon received numerous awards, including Best Destination Website from the U.S. Travel Association. A brand new campaign, scheduled for spring 2016, will showcase the Seven Wonders of Oregon from a different angle.

San Francisco Travel, the city’s destination marketing organization, also won awards for its website. Visitors find it easy to explore the city’s many offerings because of the site’s bold new design, effective visuals and suggested itineraries based on specific needs and interests.

The home page gives users a crash course in the city’s most iconic landmarks. Six of them are shown at the bottom of the screen, reminding users at a glance of the city’s strong, well-developed and widely-recognized tourism product, and the must-see places that amply justify a visit to San Francisco.

If you try to say you’ve got something for everyone, your message gets lost and you end up saying nothing at all. So says Alex Fuller, Creative Director of the ad agency behind Visit Utah. She also explains the importance of not getting stuck in a rut, of boldly leveraging an established asset and sticking to your message. The idea of promoting the destination through its national parks is not new, but the message and the proposal are: turn Utah’s five national parks into one destination, one product, one challenge: something to check off your bucket list, like seeing the Grand Canyon. Check out the video ad for the Mighty 5® Campaign.

This campaign put Utah on tourists’ radar, especially at the international level. For the past 10 years, Utah’s tourism has grown by 44%, compared with a mere 35% growth for its neighbours. According to Vicki Varela, Utah Office of Tourism Director, Utah is now officially “on the map.”

Staking out a Strong Position

Other destinations are also relying on selected themes to position themselves effectively, as Greenland has done with its The Big Arctic Five campaign. There is also the trend of offering must-see or must-visit attractions that make planning easier, especially for those about to embark on their first visit. Notable examples of this trend are Visit Copenhagen, Destination British Columbia (British Columbia’s destination marketing organization), and the Québec City region.

Every stakeholder wants their advertising campaign to accurately portray their product. But, all too often, by trying to please everyone – members and visitors alike – some destination marketing organizations diminish the impact of the region’s distinctive attractions. As demonstrated by the aforementioned examples, you can win big if you grab the potential visitor’s attention, and get on the list of dream destinations, by focussing on just a few brand identity assets; the rest will happen at another marketing level.