A look at the cruise destinations competing with the St. Lawrence

The St. Lawrence River is still a relatively new destination on the North American cruise market. Recent federal and provincial spending on ports of call has helped upgrade reception facilities and improve the quality of the visitor experience. In this highly competitive industry, where a single cruise ship call can generate thousands of dollars as well as significantly increase a destination’s visibility, do we measure up to our competitors? Firstly, who are they? Secondly, how do they market themselves and what is their market share of this sector?

Some basic observations about Canada and Québec

In 2007, Business Research and Economic Advisors (BREA) calculated that 2 million cruise passengers visited Canada during nearly 1,000 calls. In total, the industry generated some $2.3 billion and created 16,600 jobs. BREA estimates that 6% of this money was spent in Québec while 21% was spent in the Maritimes. In 2009, Québec welcomed some 166,000 passengers and 63,000 crew members. According to estimates from the Québec Ministère du Tourisme, cruise passenger spending will rise from $73 million to $275 million by 2014, an annual growth rate of 17%.

Table 1: St. Lawrence River ports in 2009:
Number of calls and number of passengers 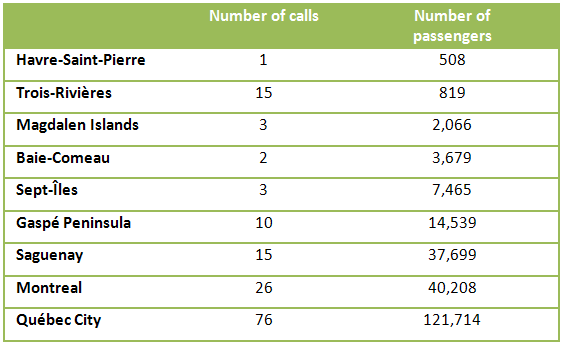 Source: Visitor statistics from 2006 to 2010, compiled by the Québec Ministère du Tourisme

A well-established cruise destination, the Maritimes have engaged in promotional and representational efforts for many years. They can be considered both competitors and business partners, because Maritime calls can enhance the itineraries of cruises headed to Québec.

The primary ports of call are Charlottetown, Gros-Morne, Halifax, Saint John and Sydney. Though history is the main attraction (museums, heritage sites, historic villages), outdoor recreational activities are also a big draw (hiking, beaches, kayaking, golf, whale-watching and other excursions). Table 2 illustrates the cruise visitor numbers recorded for the year 2009 in the major Maritime ports of call; Québec City was added by way of comparison.

Table 2: Cruise statistics for the Maritimes – 2009

According to a 2008 study by the PEI Tourism Research Centre, 80% of the cruise passengers visiting Charlottetown came from the United States, 69% were 55 years or older and 85% were on their first visit to the Maritimes. 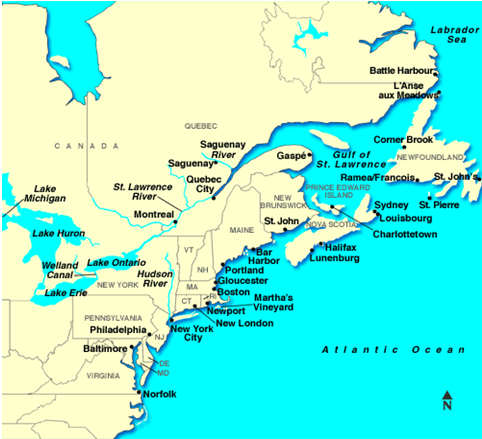 Let us take a closer look at our neighbours to the south. New England benefits enormously from its proximity to the major client bases of New York and Boston, which are the departure points for numerous cruises heading to Canada, as well as those for Bermuda and the Caribbean. The table below provides a brief overview of the cruise industry spin-offs generated in New England.

Table 3: Overview of the cruise statistics for New England – 2008

According to these findings, the state of New Jersey attracts fewer passengers than the province of Québec. However, according to figures from BREA, Québec attracted far fewer cruise-related spin-offs, generating only $138 million in 2007, compared to $387 million for New Jersey in 2008. In terms of employment, all of Eastern Canada (including the Maritimes) generated only 2,000 cruise-related jobs, compared to the 6,814 for New Jersey recorded by the CLIA.

Cruise Maine presents the change over time in the number of cruise ship calls since 2003. 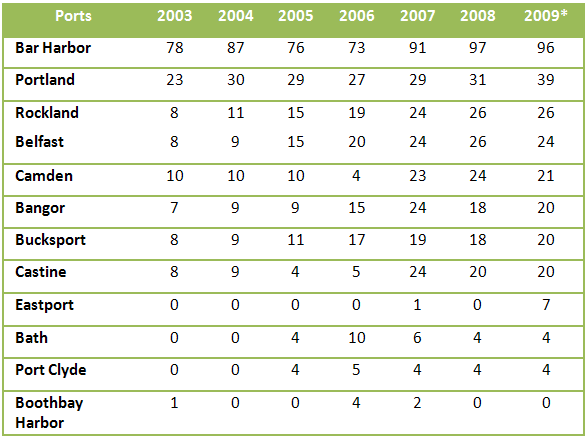 According to a 2008 study by Todd Gabe and Jim McConnon, two economists from the University of Maine, cruise passenger spending injects approximately $5.8 million to $8 million into the Portland regional economy each year. On average, a single passenger spends about $81 per day, the major part of it spent as follows:

The Baltic Sea region is booming. Europeans are increasingly attracted to the area and North Americans are also showing greater interest in these destinations. The biggest consumers of cruises, North Americans are already well-acquainted with destinations like the Caribbean, the American West Coast and Alaska. The search for new destinations has led them to look at Mediterranean and Northern European cruises. The Baltic Region’s position on the cruise market is, in many ways, similar to that of the St. Lawrence: a destination offering culture, history, Northern landscapes, outdoor activities, coastal villages, etc. 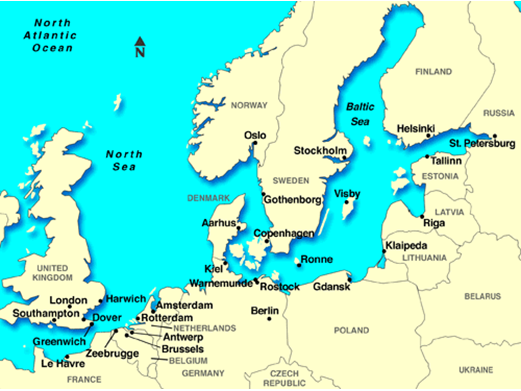 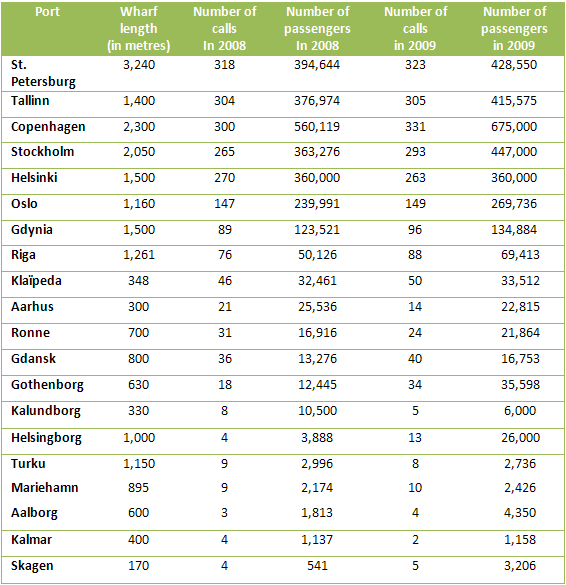 Port facilities in the Baltic Region are undergoing numerous improvements. The city of St. Petersburg has built a new terminal for cruise passengers that should be completed sometime in 2010. Hamburg inaugurated its new cruise terminal in August 2009. The CLIA also reports that Stockholm, which has been operating one new terminal since 2008, will be opening another in 2010. It will house a museum of photography, among other things.

The Baltic Region has also decided to take steps to reduce the environmental impact of cruises by pushing the Clean Baltic Shipping Program. This plan has five main objectives:

All signs indicate that St. Lawrence ports are competing in an increasingly well-organized and diverse market. This means it is vital to continue developing port facilities and, more importantly, work to create a high-quality product that stands out from the competition.