Tendency of adherence to green labels in hotels across Canada

Improvements of environmental performance by the accommodation sector are not measured systematically and this makes it hard to estimate the extent of real change. In Canada it is certainly not uniform according to adherence to the programs detailed in Table 1. Although some hotels continue greening their performance, the sector is only at the beginning of reducing its ecological footprint. For example, if we compare the results of Table 1 to the number officially registered accommodation establishments in Quebec by the Corporation de l’industrie touristique du Québec, less than 2 % of the sector participates in any of these programs. 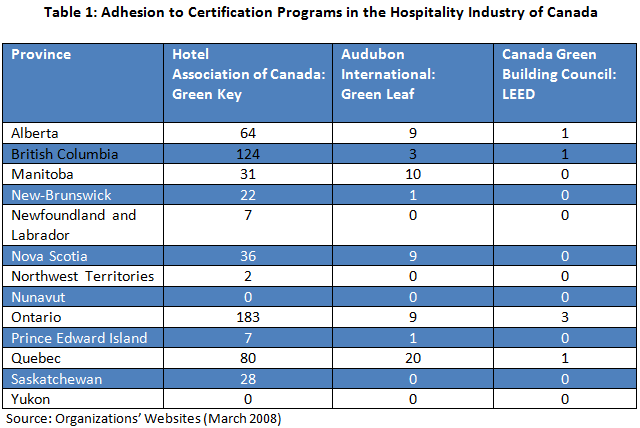 The Green Key Eco-Rating Program was launched in 1997 and it is administered by the Hotel Association of Canada (HAC). The number of green keys recognizes participating establishments and more keys mean more “green” measures implemented. Although any establishment can apply for the label, the program is still designed for large hotels. Participation is comprised of a self-administered on-line audit that consists of 140 questions across 5 categories of operation. Since 2007 the HAC performs random on-site audits.

At present about 600 properties are registered with the program across Canada (Table 1). The aim is to reach 1000 by the end of 2008, which would represent 30 to 40 % of all hotels in Canada with 50 rooms or more. In March 2008 Ontario and British Columbia had the most hotels participating in the program (Table 1) and most were part of a chain and had a 3 key rating . Hotels with a five key rating are considered to have the highest standards in environmental management and social responsibility throughout all areas of operations set at an international standard for sustainable hotel operations (refer to list at the end for examples).

In Quebec labeled establishments are unevenly distributed on the basis of official tourist regions. Montreal has the highest number of establishments followed by Quebec and Montéregie, but some regions have no participants at all. 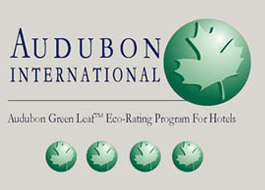 Although any type of accommodation facility can join the program, in March 2008 only 44 were members in Canada and mainly in Manitoba, Nova Scotia and Ontario (Table 1). Most Canadian participating establishments had 3 leaves. The only two establishments in Quebec were in Montreal and each had two leaves. The low number of participants in a Canadian context is due to the popularity of the HAC’s green-key program although some hotels participate in both.

In November 2007, l’Association des hôteliers du Québec with its private and public sector partners announced its own program to recognize establishments who have implemented sustainable development principles. Participating establishments receive the logo of Thuya occidentalis, whose different colors represent the 3 pillars of sustainable development. Similar to the other programs, this one also involves an initial self-assessment of 140 specific operations in 10 categories. Any, accommodation establishment is eligible to apply. Given the programâ€™s recent creation, statistics are not yet available to show participation rate. 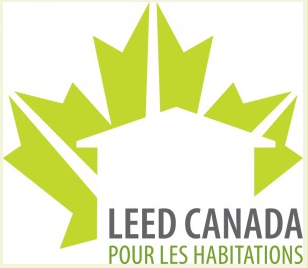 The most rigorous program for the built environment is LEED, administered by the Canadian Green Building Council. It is applicable to newly constructed and establishments in renovation and participants conduct an assessment of performance measures. Once registered, participants conduct an evaluation across various operational categories to obtain silver, gold and platinum certificates. In March 2008 there were six hotels registered in Canada, half of which were in Ontario (Table 1) and the highest-level of certification was gold.

Does the market care?

There is proof (at least suggested by large hotel chains) that being green means a good image, savings and net improvements of economic performance. As the market is starting to adjust to the “green revolution”, being green will continue being important. Most studies also suggest a rising demand for green accommodation although how this translates in real figures in different destinations is not yet ascertained. However, it appears that the eco-coconscious traveler is no longer satisfied by symbolic environmental efforts such as opting to reuse towels.

European reports indicate that corporate social responsibility will become an even more important factor for the meetings and events sector over the next years and this trend appears to be the same in North America. Based on the 2008 Hotel Association of Canada / Fleishman Hillard Travel International Travel Intention Survey, greenlodgingnews.com reported that 29 % of business travelers compared to 21% of leisure travelers were prepared to pay 5 % more for a more eco-friendly stay. The same study also showed that 52 % of all travelers surveyed sought hotels with strong green practices “occasionally” or “as much as possible” compared to 46 % who said “rarely or never”. Interestingly 91 % of all respondents were not familiar with Canada’s Green Key Eco-Rating program. When asked if their organization had a green travel policy 60 % said no, 8 % said yes and 32 % did not know.

In the meantime the hotel industry needs to do what makes business sense. An establishment that is weak on both values and commercial competence will mean bad business in the future. The snapshot of adherence to green certification programs suggests that small hotels are laggards in environmental responsibility given that most of the hotels labeled today belong to chains, even if in reality many small establishments are actually improving their sustainability performance. The challenge to translate environmentalism into profits may be much higher for them. Given that tourists are not yet green enough means time is in their favor. There might be other forces at play that will push them in the “green” direction such as the prediction that energy prices could be 70 % higher in some Canadian provinces and landfills fees over the next five years.

All hotels must change their practices to move towards sustainable operations and there are literally hundreds of resources to help with the process today, including many examples of good practice.

Best practice hotels according to labels mentioned in this analysis:

Participation costs in programs is variable. For members to an organization, the costs are as follows to the aforementioned programs:

Reser-vert: Hotel Association of Quebec: For members it CAD 150 to enter the program and subsequently the program costs CAD 350 (+GST) annually.

Leedership in Energy and Environmental Design: The cost of participation is dependent on the size of establishment. For a hotel with less than 500 m2 surface area in Quebec certification would be around CAD 4200 (+ tax) plus registration cost CAD 1000 + GST). For establishments that are in renovation the fee is about 50 % less, including registration fee.