Familiar with tweens? You should be…

A recent development in marketing has been to define a new customer segment: “tweens” or preteens. While young people ages 9 to 14 are no longer children, they are not yet teens, either. With surprising purchasing power and influence on a variety of family decisions, they are an attractive market. Although manufacturers have recognized the potential of this market, the travel industry is just beginning to clue in. In fact, tweens now make up another type of traveller. This does not mean family vacations are a thing of the past; they have simply changed direction – to follow tweens!

What is a tween?

“Tween” is a marketing term used to describe preteens ages 9 to 14. Straddling childhood and adolescence, they have a foot in both worlds. When it comes to technology, they rule: they are online longer, adopt and master new technologies faster than adults and participate in a wider variety of online activities. In Canada, 85% of tweens have access to a computer, 82% to a video game system, 25% to an iPod or MP3 player and 16% have a cell phone (this number rises to 26% among 12 to 14 year-olds). 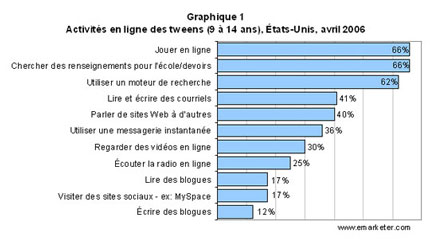 Spending by tweens has doubled every decade for the past 30 years. In the US today, between spending their own money and influencing their parents’ purchasing decisions, this segment controls or influences approximately US$260 billion in spending. According to the BRANDchild study (conducted by Millward Brown among 2,000 young people ages 9 to 14 years in several countries), tweens influence 80% of their parents’ brand purchases. 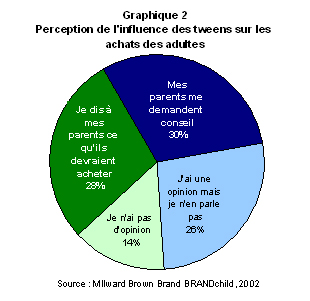 In 2005, there were approximately 2.5 million tweens in Canada and their average annual income was CAN$1,155. This means they controlled CAN$2.9 billion of their own money in addition to influencing another CAN$20 billion in family purchases.

It is this financial power that differentiates tweens from earlier generations; never has this age group exercised such influence. The generation is populous enough to ruin a brand it does not like or catapult another to success by adopting it. The influence of tweens is particularly noticeable when it comes to choosing a restaurant, groceries and even cars, but they can also affect travel-related decisions: 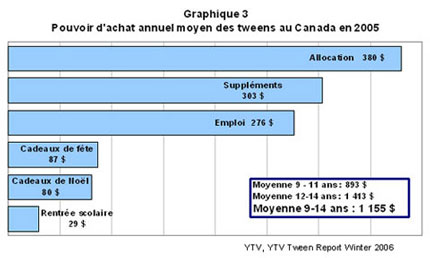 They may be plugged in, but do they shop online? 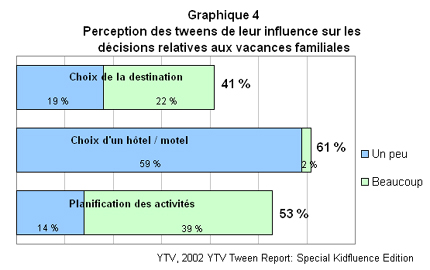 Young people in the United States, Australia and Great Britain see an average of 20,000 to 40,000 commercials per year and spend 60% more time in front of the television than at school. Two surveys conducted by The Harris Interactive Youth and Education Research Group in May 2006 offer more insight into young people’s attitudes towards advertising:

Generally speaking, marketing specialists use the strategy of treating tweens like teens. The marketing industry has forced children to grow up faster and studies show that those aged 11 and older no longer consider themselves children.

There is a major debate concerning the ethics of tween-oriented marketing. By treating these young people like mature, independent consumers, advertisers are taking parents out of the decision-making process and thereby making children more susceptible to unhealthy messages about body image, sexuality, relationships and violence. This is an emotional issue that creates sharp divides. Although the tourism industry is less involved in such marketing, it is important to be aware of the issues.

In terms of the tourist experience, tweens are often too old for activities aimed at children and too young for teen and adult activities. Very few tourism-based businesses offer products specifically for tweens. However, some businesses have adapted their products for this segment.

Some Four Seasons hotels (Atlanta, New York, London, Chicago, Philadelphia and Toronto) have added a youth concierge to their service teams to deal specifically with tweens and teens. These hotels have also conducted focus groups with tweens in the aforementioned cities to identify cool things to do locally. They now have an updated idea of this clientele’s preferences and interests. These hotels also provide special amenities to this customer category, offering things like popcorn, recent magazines and films, an indoor pool, and balanced meals designed especially for them. For its part, the Ritz Carlton in South Beach, Miami, provides a tech centre for tweens and teens.

Finally, the Florida tourism portal lists activities aimed at tweens, like scuba diving, an indoor rink for roller-skating and skateboarding and water skiing.

Be among the first!

Given their economic muscle, tweens will no doubt continue to be targeted by businesses. In addition, since relatively few tourism businesses target this clientele in particular, doing so would probably provide a competitive edge. A few suggestions for reaching this market segment: